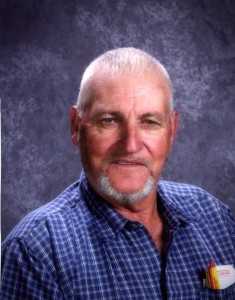 Funeral Services for Darrel Wayne King, age 62 of Blue Eye, MO. will be held at 10:00 a.m., Monday, October 20, 2014 at Greenlawn Funeral Home Branson with Rev. Billy Rogers and Rev. Bruce Baker officiating. Burial will follow in Blue Eye Cemetery in Blue Eye, MO. Arrangements are under the direction of Greenlawn Funeral Home of Branson.
He died at 4:26 a.m., Thursday, October 16, 2014 at his home.
He was born on December 28, 1951 in Kansas City, MO the son of Cal King, Jr. and Lou Alice King Holderby. He was an employee of Blue Eye Schools and a member of the Calvary Temple Full Gospel Church. He had been a lifelong resident of the area.
He is survived by his wife of 45 years, Carolyn Sue Snowden King of Blue Eye, MO., his mother, Lou Alice Holderby of Cassville, MO. two daughters; Kimberly King Weiler and husband Greg of Blue Eye, MO., Miranda King Cupit and husband Mark of Clever, MO., three siblings; Rhonda Pearsall of Springfield, MO., Darala Olle of Pleasanton, TX., Cleatus King of Hardy, AR. and two grandchildren; Shellby and Coleson. He was preceded in death by his father, a daughter, Angela King, a sister, Brenda King Morrill.