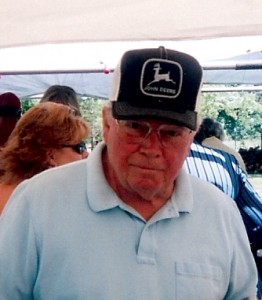 Dean Chapman, age 75, of Halfway, MO, was called home to be with his Lord and Savior Thursday, February 5, 2015, at Mercy Hospital Springfield, MO. He was born September 7, 1939, in Conway, MO, to Olaf and Bertha Lee (Davidson) Chapman. He spent his early years on his parent’s farm in Springfield. He is a US Navy veteran. He was the owner of C & C Floor Covering. He was united in marriage to Marlene Williams May 31, 1975. Dean was an avid hunter, and second amendment supporter. He cared a great deal for his family, home, and farm. His cattle were always fat! He will be greatly missed.
He was preceded in death by his parents.
He is survived by his wife of 39 years Marlene Chapman of the home; three children: Cathy Stoddard and husband Paul of Springfield, MO, Matt Chapman of Rogersville, MO, and Jay Chapman of Rowlett, TX; a step-son Lloyd Richards of Bolivar, MO; three grandchildern: Samantha Hodges and husband Eric of Elkland, MO, Chris Chapman of Olathe, KS, and Joshua Chapman of Springfield, MO; three great grandchildren: Randy, Brayden, and Peyton; one sister Pat Admire and husband Vernon of Bolivar, MO; one brother Richard Chapman of Overland Park, KS; numerous other relatives and friends; and his faithful companions Rowdy, Willie, and BobbieSue.
Funeral services will be held at 1:00 PM Tuesday, February 10, 2015, at Pitts Chapel Bolivar, MO, with Dr. Dann Masters officiating. Burial will follow at Greenwood Cemetery, Bolivar, MO. Visitation will be held one hour before service from 12:00 to 1:00 PM in the funeral home. Arrangements have been entrusted to Pitts Chapel Bolivar, MO.