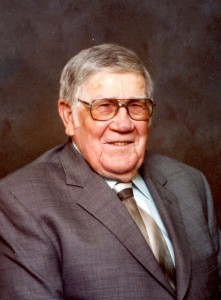 David E. Baker, age 90, departed his life on Friday, November 28, 2014 in his home surrounded by his loved ones. Dave was born on October 17, 1924 near Long Lane, Missouri, to Sam and Lura Baker. Dave was in the United States Army during World War II serving overseas in both Germany and France. Dave was employed by the Missouri Hydro Gas Company as a manager for many years, and he retired from JD Dickerson. Dave was a devoted Christian and an active member of the First Freewill Baptist Church. Dave was preceded in death by his parents and his 11 siblings.
Dave is survived by his loving wife of 68 years Enola; their two sons Larry and Garry and his wife Nancy; four grandsons Lance, Jeremy, Lewis, and Shane; three great-grandchildren Ashleigh, Cole and Olivia.
Dave never knew a stranger, so he will be missed dearly and never forgotten.
Visitation will be Wednesday, December 3, 2014 from 6-8 pm in Greenlawn Funeral Home South.
Funeral service will be Thursday, December 4, 2014 at 11:30 am in Greenlawn Funeral Home South. Burial will follow at 1:00 pm in Missouri Veterans Cemetery. In lieu of flowers the family requests memorials be made to the charity of donor’s choice.