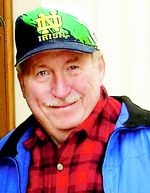 David Grimes, 73, of Springfield, Mo., passed away on June 22, 2009. He was born in Rockford, Ill., on April 14, 1936. David was a graduate of St. Patrick’s Catholic High School and Rockford College. He served as a Staff Sergeant in the United State Air Force. He retired as a Water Treatment Sales/Field Chemist in 2006, after 50 years. On September 4, 1964, in Rockford, Ill, he was united in marriage to Gladys (Wiegert) Grimes. He was a member of St. Elizabeth Ann Seton Catholic Church and enjoyed going for walks, playing the piano, and riding on his tractor at the Ozark cabin. He is survived by his wife, Gladys Grimes; children, Barbie Reed, Debbie Lambeth, David Grimes Jr. and Gregory Grimes; and six grandchildren. Funeral mass will be held in St. Elizabeth Ann Seton Catholic Church on June 27, 2009, at 10 a.m. Burial will be in Smith Chapel, Brixey, Mo. Visitation will be held in Greenlawn Funeral Home South, from 6 to 8 p.m., June 26, 2009. In lieu of flowers, memorial contributions may be made to Gladys Grimes Family.