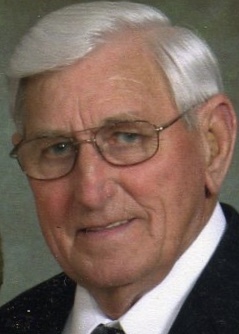 David Leonard Jackson 93, Springfield, Mo. passed away Wednesday, May 15, 2019, in Cox Medical Center South, after a short illness. He was born in Niangua, Mo. on November 6, 1925, to James Washington and Thursa (Shelby) Jackson. He was a member of Webster Park Baptist Church. He was a former owner-operator of Hilcrest Laundroma, as well as other businesses in the Springfield area. He loved traveling and spending time with his family.
David was preceded in death by his parents, He is survived by his wife, Norma Jean Jackson, his son, David W. Jackson and his wife Pat, his daughter: Sharon Solscheid and her husband, Paul, five grandchildren: Brook Leonard, Tommie Mailey, Paul David Solscheid, Kristin Perotti and Joseph Solscheid, eight great-grandchildren: Landon Leonard, Jackson Leonard, Easton Leonard, Cody Mailey, Daniel Mailey, Jaden Mailey, Anthony Perotti and Grace Perotti.
Funeral services will be at 1:00 p.m. Monday, May 20, 2019, at Greenlawn Funeral Home North, with burial to follow, in Greenlawn Mmeorial Gardens. no visitation is planned.