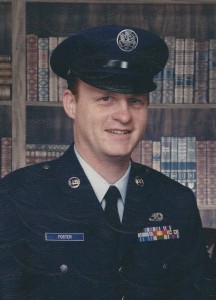 David Mark Foster successfully completed his earthly journey on Sunday, July 12, 2015 at Cox Hospital South. He was born on May 29, 1966 to Oscar and Anna Foster of Springfield, Missouri. David gave his heart to Jesus Christ and began serving the Lord at an early age, and continued to faithfully live for God throughout his entire life. He graduated from Christian Lighthouse Academy in Springfield in 1985, and shortly thereafter joined the United States Air Force. David proudly served his country for two enlistments, which included two deployments to Saudi Arabia and Turkey during Operations Desert Storm/Shield.
After returning to civilian life, David enjoyed living in several different states, as he followed his career in fiber optics. These included Louisiana, Colorado, Florida and Texas. In 2012 he returned to his home birth state of Missouri, where he attended Harvest Ministries of Springfield. He was also a member of American Legion Post 639.
David was preceded in death by his father, Oscar Allen Foster of Springfield, Missouri as well as his grandparents; Ben and Mary Pruett of Poplar Bluff, Missouri, and Tom and Sarah Foster of Diggins, Missouri.
He is survived by his mother, Anna Lou Foster of Springfield, Missouri as well as his five siblings; Sharon Knott (Captain Ron Knott) of Euless, Texas, Larry Foster also of Texas, Janet Royer of Springfield, Missouri, Michelle Jin (Ethan Song Jin) of San Francisco, California, and SoShawna Gray (Elton Gray) of Seattle, Washington. Surviving nephews and nieces include; Keith Knott, Kim Yates, Kerry Knott and Kristi Knott of Texas, Jeremy Foster of Texas, Joshua, Nathaniel, Michael and Victoria Royer of Missouri, and Samuel, Olivia, Emma, and Lily Gray of Washington. Other survivors include many uncles, aunts, and cousins.
Services for David will be at 1:00 P.M. Wednesday, July 15, 2015 at Greenlawn Funeral Home East with burial in Missouri Veterans Cemetery. Visitation will be from 6:00 to 8:00 P.M. Tuesday, July 14, 2015 in the funeral home.