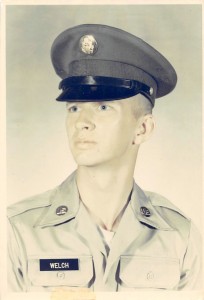 David Michael Welch, born November 5, 1949 in Springfield, Missouri, died in Springfield, Missouri on January 11, 2016. He was preceded in death by his parents, Norma Jean Welch and Charles Richard Welch. Michael is survived by his wife, Regina Walsh Welch and his daughter, Michelle Welch Melton (Sean). Michael has one granddaughter, Hannah May Melton. A brother, Thomas Ray Welch (Rana) and their children Melissa Welch Harper (Ryan) (Harper children; Garrett, Grant, Gage) and Jeffrey Thomas Welch. Other nephews include Mikell May and Jason Walsh. We gratefully acknowledge all family and friends who enriched Michael’s life by their presence. Our gratitude extends to Dr. Tiriveedhi and Staff as well as The National Institute of Health Staff (Julia Friend) for their most dedicated care of Michael.Michael proudly served his country in Vietnam as a part of the 18th Military Police Brigade. Services will be held on Friday, January 15, 11:00 A.M., at the Missouri Veterans Cemetery.Mike often went for a walk in the park and we would like to honor him with a bench. Those who would like to contribute (in lieu of flowers) may send their donation to:Friends of the Garden