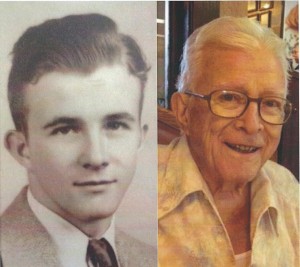 Walter Gene Bonner was born to Wilma Verlee (Criger) Bonner and Eugene Benton Bonner on August 28, 1926 in Springfield, MO. He passed into spirit on October 1, 2015 at the age of 89 surrounded by his family. He was the oldest of four children, Betty (Bonner) Arell, who survives him and Gene Bonner and Jerry Bonner (deceased). He is survived by his four children, Mindy (Bonner) Spitz and her sons, Jared and Logan, Joel Bonner, Ben Bonner, his Wife, Holly and their children, Brooke, Luke and Chase, Cindy (Bonner) Mais and her Husband Mark and their children, Lena and Marek. He is also survived by his ex-wife and best friend, Margie Bonner, as well as an Aunt, Nieces, Nephews, Cousins and many friends.
Walter attended Robberson Elementary, Reed Junior High, and Senior High (now Central High). He recently celebrated his 71st class reunion. He had a variety of jobs throughout his school years, working on a Soda Pop truck, doing farm work, at Ramey’s Super Market, Heer’s Department Store, Sinclair Oil Company, and at the Frisco machine shop. He married Margie Robertson in 1946. He served in the Army from 1945 through 1947 and worked at Cloud Floor Company for a couple of years before going to Drury College and receiving a Bachelor degree. Walter and Margie moved to Independence, MO, where he worked for Butler Manufacturing Company. After his first two children were born, Walter wanted a new career and entered Cleveland Chiropractic College. He worked full time and went to school at night and became a Doctor of Chiropractic. This family of now 3 children moved back to Springfield and Walter opened a Chiropractic practice in 1967. A few years later a 4th child was born.
Walter practiced Chiropractic until he was 88. During those years he treated hundreds of patients, many whom became good friends. He was a gifted healer and he touched many people with his generosity, kindness and good nature. He was well loved by his family, friends and all who knew him.
Services will be held at Greenlawn Funeral Home East 3540 East Seminole Springfield, MO. A visitation will be held on Friday, October 9 from 5:00 to 8:00 pm. A Memorial Celebration will be Saturday, October 10th at 2:00 pm. The family would like to invite those who loved Walter to share their stories, either in written form or by coming forward and sharing them at the Memorial Celebration.
In lieu of flowers, donations may be made to VFW Post 3404.