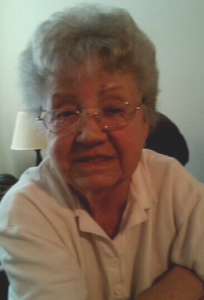 Della Mae (Snyder) Wagner was born July 14, 1923 and passed February 19, 2016 at 92 years of age. She was the daughter of William P. Snyder and Alice (Roach) Snyder, one of 6 girls and 2 boys, born in Doughetry, Oklahoma.
Della married Hubert Franklin Wagner and had 3 children, Carolyn Sue, David Lee and a stillborn baby, Tamara Lynn. She leaves behind 8 grandchildren, 12 great grandchildren and 10 great great grandchildren, including 6 sets of 5 generations.
Della was a faithful follower of Pastor Fred Lynn. She was a member of Victory Baptist, Glendale Baptist, and her last church home First General Baptist.
If you knew Della then you knew her companion of 34 years Floyd Seals. Della and Floyd were “professional” Bingo players playing 8 times a week. It doesn’t get any more professional than that!
Della and Floyd loved to fish but their passion for antiques kept them busy attending auctions. They followed Billy Long; and Long said he knew they held the largest Keen Cutter and Frisco collections he had ever seen.
Yes, Della may have been a short 4′ 10″ but she sometimes came off as big as a bull in her gentle way of telling you how things were going to be! Della was recently awarded resident of the month at James River care center where she has spent the last 14 months. Some of her memorable quotes or habits include not saying goodbye when she was finished talking to you on the phone, and Saying “Toodle-de-do, I love you” when you left her house. She would also tell the grand-daughters, ” No more kids!” Her most famous quote came at Christmas time where she was overly anxious to eat and blurted out, To a very loud gathering of family:
WILL EVERYBODY SHUTUP!
HAROLD SAY THE —— PRAYER!
GOD FORGIVE HER BUT WE’LL MISS HER.
Visitation will be held 6:00 -8:00 PM, Tuesday, February 23, 2016 at Greenlawn Funeral Home North, 3506 North National, Springfield, MO. Funeral Service will be held 10:00 AM, Wednesday, February 24, 2016 at Greenlawn Funeral Home North Springfield, MO 65803. Burial to follow at Greenlawn Memorial Gardens.