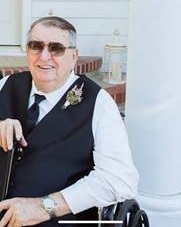 Denver Leon (Lee) Johnson, 87, of Springfield, Missouri passed away at Wilson’s Creek on May 30, 2020 at 11:35 pm. He was born on July 8, 1932 to Earl and Vena (Brown) Johnson in Bedford, Indiana. After attending high school, Lee decided to serve his country and joined the United States Army in 1949. He served in three theaters of war: the Occupation of Japan after WWII, in Korea and then in Vietnam. During Lee’s wartime serve, he transitioned out of the United States Army and into the United States Air Force. He served in the Air Force from 1952 until his retirement in 1971. He was awarded many medals and commendations including, the Purple Heart, the Bronze Star and the Silver Star. After Lee’s retirement, he became an OSHA inspector for the State of Indiana. Then in 1990, he started his own business, Brittney Inc. He owned and operated Brittney Inc. for 28 years.

Lee was united in marriage to Carol (Staggs) Johnson on July 6, 1971 in Bedford, Indiana. Lee had a passion for collecting guns, hunting, raising cattle, going to the “cabin” and spending time with his family, especially his grandchildren. Lee was a hard worker that had a larger than life personality. He was very successful and driven.

Services for Lee will be Saturday, June 6, 2020 at 2:00 pm at Greenlawn Funeral Home North with a visitation starting at 1:00 pm. Burial will follow the service at Greenlawn Memorial Gardens.