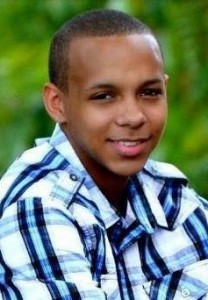 Derek James Tsotigh Jr., passed away November 13th, 2015 due to complications following a car incident. His devotion to his family and his salvation through Christ supported him during this time and ultimately gave him peace. Born on August 4, 1995 in Springfield, Missouri. A quiet and loyal young man, Derek was known by his friends and family as someone with a genuine heart and always willing to lend a hand. He enjoyed hunting, fishing, watching basketball and most of all spending time with his daughter, Gabby. Derek always put his best foot forward and had an incredibly contagious smile; he will be desperately missed. Derek loved his work, his friends, and his family. He is survived by his daughter Gabriella Nicole Tsotigh; his parents, Misty Finley, Regynold Cook and Derek and Jenny Tsotigh; his brothers Rylan Young, Maliek Hendrix, Regynold Cook Jr.; his sisters Madilyn Tsotigh, Nasha Tsotigh, KeLaijah Cook, KeiAnna Cook, Ke’Shya Cook. He also leaves behind his girlfriend, Constance Kotulski his close friend Jordan Choate and several loving aunts, uncles, cousins and a host of friends. He is preceded in death by his brother KeShaun Cook and his uncle Brandon Young. Visitation will be handled by Greenlawn Funeral Home East from 12-1 pm Friday, November 20, 2015 with the funeral services immediately after. Burial will follow at Danforth Cemetery in Strafford, Missouri. In lieu of flowers, please consider the needs of the family; contributions can be made at the funeral home.