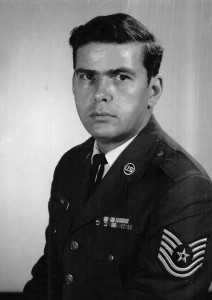 Derold Richard Adler, age 80, of Springfield, MIssouri, passed away peacefully on May 23, 2016. He was born in Aberdeen, South Dakota, on October 10, 1935, to George and Ida Adler. Derold is survived by his wife, Nancy Adler, three daughters, Lisa (Bob) Avery, Karen (Loren) Cummins, Tracy (Bryan) Bevel, and one brother, Roger Adler.
When Derold was a small child, his family moved him and his siblings to Lodi, California, where he lived until he joined the United States Marines at the age of eighteen, serving from 1953-1955. He then began a career with the United States Air Force. Shortly after joining, Derold was stationed in Fordland, Missouri, where he met the love of his life, Nancy Durham. They were married after a whirlwind six week courtship and celebrated 59 years of marriage on May 18th, 2016. They went on to have three daughters, Lisa, Karen and Tracy (a.k.a. Lucy, Fred and Sam).
Derold’s Air Force career took him and his family to numerous locations across the United States and Canada, before finally settling in Springfield upon retirement. After retiring from the Service, Derold embarked on yet a second career with General Electric Corporation where he was employed an additional 17 years before finally enjoying full retirement. While at General Electric he took advantage of the G.I. Bill and obtained a Bachelors Degree from Columbia College.
Derold loved reading and was rarely without a book in his hand. He was a member of Friends of the Library and looked forward to volunteering at their bi-annual book sale. His other hobbies included hunting, fishing, movies, and in later years, trips to the casino. Derold found so much joy in his seven grandchildren, Brandon, Jeremy, Chance, Tabitha, Riley, Lexie and Wesley, numerous “grand dogs” and was looking forward to the birth of his first great grandchild in July.
Derold was a loving husband and father, and a friend to everyone he met. He will be missed greatly.