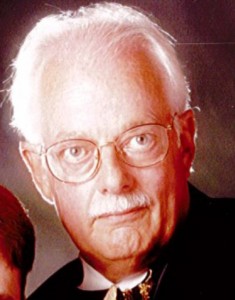 Devon F. Sherwood passed away at his home in Spring?eld MO on March 23rd, 2016. He was born on Father’s Day, June 20th, 1943 in Hannibal, MO to Malcolm and Virginia D. Sherwood.
In the spring of 1948 he moved to Branson, MO with his family and graduated from Branson High School in 1961. He continued his education at the University of Missouri in Columbia, attained his B.A. in History in 1965 and his Juris Doctorate in 1967.
After passing the Missouri bar examination in 1967 he worked with Louis Cowan in the Woodruff Bldg. He established his own law ?rm in 1972 and later he, Loren Honecker and Richard Bender formed the law ?rm of Sherwood, Honecker and Bender. Their law of?ce was on the downtown square of Spring?eld for many years. In 1974 he received the Missouri Bar Association Outstanding Young Trial Lawyer of the year award. At the time of his passing, he was in his 49th year of law practice. He was a highly skilled trial attorney who was well regarded by his peers and had a commanding presence in the courtroom. His practice focused on criminal defense, family law, and divorce. He was rated AV by Martindale-Hubbel and preeminent with a 5 star rating by his peers at Lawyers.com. He was a member of the Missouri Bar Association, the American Association for Justice (formerly Association of American Trial Lawyers), the National Association of Criminal Defense Attor-neys, and the Greater Spring?eld Metropolitan Bar Association.
He enjoyed restoring old cars, movies, bowling and philately. He was passionate about history, particularly that of Germany and World War II, contract bridge…and winning. He was a tough competitor and attained the rank of Ruby Life Master with the American Contract Bridge League. He loved animals. He loved the women in his life. He was a ?erce protector of, and advocate for, his children and grandchildren and clients. He was a loyal friend to many. He was deeply loved and will be missed. He had a wicked sense of humor, which he instilled in his children. One of his favorite sayings to them was the “Hearse Song”. “…The worms crawl in, the worms crawl out. The bugs play Pinochle on your snout…” His wish was for his body to be donated to the University of Missouri School of Medicine so that his extraordinary brain could be examined and so that he could participate in Cadaver Races along the corridors because “Damn It! I want to Win!”
He is survived by two daughters, Dr. Leslie Sherwood of Kentucky, Jennifer Schneider and husband Rick of Indiana and son Stuart Sherwood and wife Heather of Ohio; two grandsons, Hayden and Carter and one granddaughter, Taylor. One sister, Kimberley, and husband Marvin Duggan of Buffalo, Missouri, one niece and one nephew also survive him. His girlfriend, Diane Barker of St. Louis, Missouri, was also very important and instrumental in his happiness.
His father was a U.S. Navy construction battalion Sea Bee during World War II, where he was a “frogman” skilled in underwater demolition of enemy beach defenses and raider tactics. Devon was a charter member of the National WWII Museum, naming his father honoree. In lieu of ?owers, his family requests that donations be made to the museum at P.O. Box 97336 Washington D.C. 20090-7336.
At the end of his life he did not want an elaborate send off. His children have planned a celebration of his life at his regular Monday evening haunt on Monday, March 28, 2016 from 6 pm -10 pm at Jimm’s Steakhouse and Pub, located at 1935 S. Glenstone Ave, Spring?eld, MO. His friends and colleagues are invited and encouraged to attend. In lieu of flowers memorial donations may be sent to the charity of your choice.