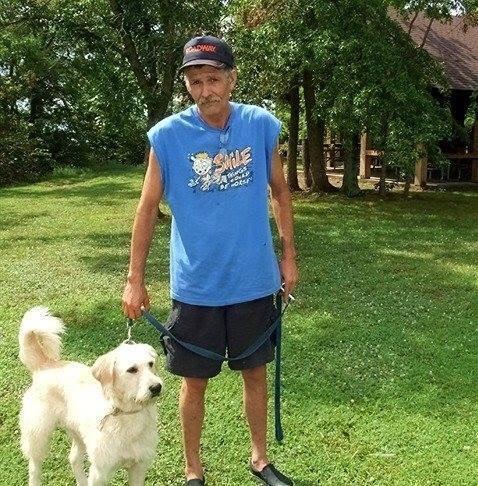 Dirk Douglas Weidman, avid dog lover and jack of all trades, lost his cancer fight on January 31st 2020 at the age of 64.

He joined his parents and an infant brother, Shel, in Heaven after being first greeted by a dog-pile of pets who've been patiently waiting for the best ball thrower to join them.

Those who are here on Earth to celebrate his life include this partner of 26 years, Jeannie Page and her two sons William Stewart (Mindy) and Sean Page (Shanna and children). His brothers, Clint (Teresa), Clay and his sister Loweva Yeubanks (Ike) and Dirk’s nieces and nephews.

In life, Dirk was born in Elkhart KS and graduated Marshfield High School in 1973. After high school, Dirk entered the Navy and was honorable discharged after his service. After the Navy, Dirk worked as a tradesman in different fields up until he retired at 60.

His hobbies were unlimited, but he enjoyed camping, reading, and killing a few zombies on his Xbox One. He is fondly remembered for his work with the local Route 66 Pet Rescue and the many fur babies he fostered so they could go to loving homes.