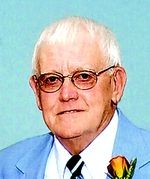 Donald W. Smith, 74, Fair Grove, Mo., died Saturday, June 20, 2009, in St. John’s Regional Health Center, Springfield. He was born November 18, 1934, in Fair Grove, Missouri and resided there all of his life. He was a sheet metal worker for 33 years retiring, in 1989. He was a Christian and a member of Community Southern Baptist Church. He was preceded in death by a son, Wayne Smith; sisters, Louise Lovan, Juanita Branam; and parents, Ben and Ethel Smith. He is survived by his wife of 52 years, Carolyn Smith; one son, Randy Smith and wife Debra, Fair Grove; a brother-in-law, Bud Lovan; one sister, Jo Cannfax, Fair Grove; one brother, Jim Smith, Everton, Mo.; and by grandchildren, Jamie Kreger, Hollie Waltz, Kellie Smith and their spouses. Funeral services will be at 10 a.m. Wednesday, June 24, 2009 in Greenlawn Funeral Home North. Burial will follow in Mt. Comfort Cemetery, north of Springfield. Visitation will be from 6 to 8 p.m, Tuesday in the funeral home