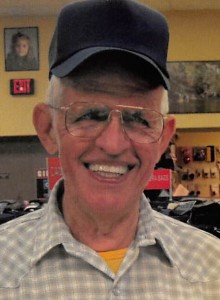 Donald Francis Bell, son of Nora Eunice (Carey) and James Ebenezer Bell, was born on August 31, 1937 in Halifax, Vermont. He died at home in Conway, Missouri on October 8, 2015 at the age of 78 years.
Don was preceded in death by his parents, 2 infant siblings, and many other relatives. He is survived by his wife of 58 years, Marion Bell of the home, daughter Marilyn Young, Mansfield, Mo and sons Ben (Cheryl) Bell, Plain City, Utah and Tom (Tammy) Bell, Fordland, Missouri; his sisters Lois (Sid) Reid, Butler, Alabama and Donna (Roger) Crane, Campo, California; and a host of grandkids and great-grandkids.
Don met his wife while they were both stationed in the army at Ft. Sheridan, Illinois. They traveled to California where they married and spent their first 16 years together. After moving to Missouri, Don worked as a truck driver for 25 years, retiring in 1997 from Associated Grocers.
Don enjoyed being outdoors and always had a big vegetable garden and lots of flowers in his country yard. He could fix anything and spent many hours tinkering in his shop.
The family would like to thank Integrity Home Health and Hospice for their assistance with his care during his last few months.
Visitation will be from 5:00 – 7:00 p.m., Tuesday October 13, 2015 at Greenlawn Funeral Home East in Springfield, MO. Funeral services will be at 10:00 a.m. Wednesday October 14, 2015 at the funeral home. Burial will be in Prairie Hollow Cemetery in Mansfield, MO with full military honors following the service.