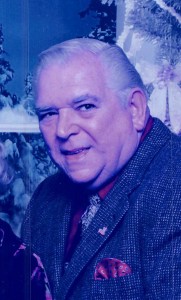 Donald Eugene Katzfey, 77, Springfield, passed away April 15, 2016 peacefully at home. He was born December 9, 1938 in Pierce City, Missouri, the son of Edward Peter and Albena Geraldine Katzfey.
He met and married his wife Jill Carol and enjoyed 47 years of marriage. Don worked in the Grocery/Produce business for 45 years at Safeway and Harter House. He always enjoyed helping and visiting with his many customers about produce, Holiday food trays and making special displays for Safeway contests. He missed seeing them and enjoyed talking to them around the area after his retirement.
Don was a long time member of Immaculate Conception Church. He was also a member of the Elks Lodge #409. He was a big fan and supported the Missouri State Men’s and Lady Bears basketball program along with the St. Louis Cardinals baseball team.
In addition to his parents, he was preceded in death by his brother, Edward Matthew Katzfey. He is survived by his wife, Jill Carol; two sons, Robert Katzfey, and Rod Katzfey and wife, Traci; brother in-law, Richard Splitter and wife Rose Ann; sister in-law Pauline Katzfey; two grandchildren, Kailey Leah and Lauren Elizabeth Katzfey; nieces, LeAnn and Sarah Splitter; nephews, Michael and Daniel Katzfey.
Funeral services will be held at 12:30 p.m. Wednesday, April 20, 2016 in Greenlawn South Funeral Home with Father Scott Sunnenberg celebrant and burial to follow. Visitation will be held on Tuesday, April 19, 2016 from 6 to 8 p.m. in the funeral home with a prayer service at 7:00 p.m. An additional visitation will be held at 11:30 a.m. to 12:30 p.m. on Wednesday ahead of the funeral services at 12:30 p.m.
In lieu of flowers, memorial contributions may be made to the charity of the donor’s choice.
The family would like to thank all who knew Don for their friendships over the years.