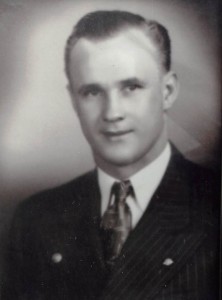 Donald H. Pippin age 93, of Springfield, MO passed away on Saturday, September 5, 2015. He was born on August 1, 1922 in Farmersville, Il. to Carl and Cannie (Julian) Pippin. Don was preceded in death by his parents, and by his wife Dorothy Nell Pippin, and by his two brothers, Vernal Pippin and Eugene Pippin.
Don is survived by by his son and daughter-in-law Don and Ann Pippin, Galena, MO; his sister, Lucille Bird, Cherokee Village, Ar; two grandchildren, Lori Pippin and Bryan Pippin; a niece, Donna Mae Shoatz, and a nephew, Darrell Pippin. He also leaves behind many other relatives and dear friends.
Don was a longtime member of Faith Baptist Church in Springfield. He served proudly in our armed forces during WWII as a member of the US Army OSS, and he was an active Shriner for over 50 years. He was a hard worker and ran his own tire shop in Springfield for over 40 years.
Funeral services will be held at 1:00 p.m. on Monday, September 14, 2015, at Greenlawn Funeral Home North in Springfield, with Dean Towe Jr. officiating. Visitation will be held prior to the service on September 14 th from Noon to 1:00 p.m. Burial will be in Greenlawn Memorial Gardens. Memorial contributions may be made to the Shriner’s Hospital’s for Children. www.shrinershospitalsfor children.org