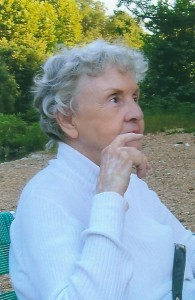 Doris ‘Elaine’ Day Maus, affectionately known as Mousie to her family, 93, passed away peacefully on January 22, 2016 at Mercy Hospital, after what she called ‘a great life, with no regrets’….She was born on September 27, 1922 in Springfield Missouri to Samuel and Lela Day. She attended Springfield High School currently known as Central High School, where she was the star of productions in the drama department. She and her beloved husband, Almon, were married in Salina, Kansas on July 11, 1942. She worked in the code-breaking department during WW II in Washington D.C. while Almon served in the Army Air Force. After the war, she supported Almon throughout law school and shortly after he graduated, they moved to Monett, Missouri. This is where he started his law practice and they raised their family. They moved to Springfield in 1979 when Almon was appointed to the Missouri Court of Appeals.
Elaine was a homemaker, an AVID bridge player, loved to watch football and enjoyed reading and traveling. She frequently talked about all the special trips she and Almon were fortunate enough to take. Elaine loved her family, had a great sense of humor, and was always very appreciative and thankful for the wonderful life she had.
Elaine is survived by her son Dr. Stephen D. Maus, and wife Nancy of Republic; her daughter Dr. Sherill Easterling, and husband Jerry Springer of Fort Davis, Texas; her granddaughter Natalie Clark, husband Bill and great-grandsons, Cooper & Collin of Springfield; her special cousin Virginia Smith of Springfield; a step-granddaughter Lisa Easterling of Fort Worth, Texas; and her very close friends, Lindy Maus & Cheri Cross. Also, a big thank you to The Gardens Independent Living & Phoenix Home Health Care providers for their support and love.
A visitation to celebrate her life is scheduled for Wednesday January 27 from 5-7 at Greenlawn East.
“Mrs. Maus’s children, Sherill Easterling and Stephen Maus, will be unable to attend this visitation and will hold a celebration of life memorial at a later date.”
Memorial contributions can be made through her honor to the Boys and Girls Club of Springfield 1300 N. Boonville Ave, Springfield, MO 65802.