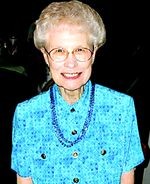 Doris Emily Johnson, the daughter of Rev. Lynn and Justina Swadley, was born on July 18, 1920, in Clever, Missouri. At the age of seven, she professed Jesus Christ as her Lord and Savior, and was baptized by her father, who was then pastor of Pythian Avenue Baptist Church in Springfield. From that young age until June of this year when her health failed, she stayed very active in Baptist churches wherever she lived, always finding a place of service for her Lord. She was a member of South Haven Baptist Church and loved being a part of Young In Heart and her Sunday School Class there. She married Stanley Johnson on November 4, 1942. They enjoyed nearly 55 years together before Stanley died in 1997. She was also preceded in death by her parents and her sister, Lela Berry Blankenship. She is survived by three brothers and their wives, Bob and Barbara Swadley and Rev. Paul and Betty Swadley of Springfield, and Rev. Lynn Junior and Helen Swadley of Clever. Doris and Stanley had no children, but dearly loved their nieces and nephews. Many good friends and cousins also mourn her passing. Doris received her Associate of Arts degree from Southwest Baptist College in Bolivar, a Bachelor of Science degree from Southwest Missouri State University in Springfield, Missouri, and earned her Master of Education degree from the University of Kansas in Lawrence, Kansas. Doris was always pleased and honored that she received a full scholarship to pursue her Masters degree at K.U. Doris enjoyed a lifetime teaching career. After only two years of college, she began teaching at Logan School in Greene County. There were forty pupils in eight grades and some of the boys were taller than their teacher. The next year, she taught at Kinser, also a one room school. In addition to teaching, her duties there included building a fire in the coal burning stove, and fixing lunch for the students. She continued her education during the summers. After that, she taught two years in Springfield. After moving to Lawrence, Kansas, with her husband, she spent three years in class rooms there and then served as elementary school principal for twenty seven years. Doris and Stan bought their first camper in 1966, discovered a love for travel and camping, and after that always had a motor home. They toured every state in the U.S.A except North Carolina and Alaska. After Stan’s death, Doris was able to visit both those places with her church group. Memorial services will be at Greenlawn Funeral Home South, Thursday, August 20 at 3 p.m. with visitation prior to the service at 2 p.m. with Rev. Paul Swadley officiating and Rev. Lynn Junior Swadley fulfilling her request to plan music involving members of her family, including brother Bob, her sisters-in-law and her nephews.