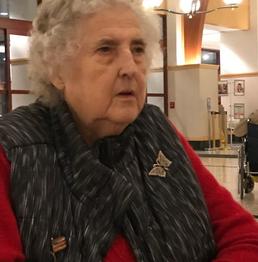 Dorless (Doodle) Sue Jones (Jenkins), 82 of Pleasant Hope, Missouri passed away with her family at her side on Friday, March 13, 2020 at Cox South Hospital. She was born to Clarence and Elsie Jenkins on February 4, 1938 in a little log cabin in Bolivar, Missouri. She was a 1956 graduate of Bolivar High School. On October 11, 1957, she married the love of her life and became Mrs. Floyd Jones.
While Dorless was in high school, she and her sister worked for the Drake theatre in concessions, which left her with a true love of cinema. She was a proud bugler and flag bearer for the Bolivar Drum and Bugle Corps. Dorless was selected by the Royal Rooters of Bolivar to be on their cheering squad.
Dorless was very active in the Methodist Women’s Circle and taking care of the children at church. She loved being a room mother at school for her two sons, Bruce and Ronald. Dorless managed the restaurant at the 166 Auto Auction and retired from there in 1997.
After her retirement, she again became heavily involved in her church activities and spending time with her husband.
Dorless is preceded in death by her parents; one son, Ronald Jones; her siblings, James Howard Jenkins, Marion Garris, and Sylvia Williams. She is survived by her husband of 62 years, Floyd Jones; her son Bruce Jones (Cheryl); grandchildren, Alan Gray Jones and John, Amy, and Melonie Haney; and many extended family and friends.
A visitation for Dorless will be held on Tuesday, March 17, 2020 at 10:00 a.m. with a funeral service following at 11:00 a.m. Burial will follow at Fasken Cemetery in Carthage, Missouri.