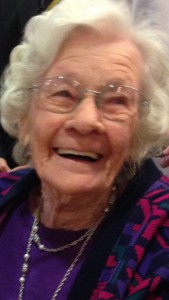 Dorothy Bodenhamer, 95, Springfield, passed away on Wednesday evening, January 20, in the Glendale Gardens Nursing Home following a stroke earlier this month. Dorothy went to her heavenly home and is rejoycing at the reunion with her loved ones preceeding her. Dorothy was affectionately known by her family and friends by the nickname “Doris.” Doris was born February 3, 1920 in County Tyrone, Northern Ireland, to John and Isabella Wray. Doris came to this country as a war bride, marrying her beloved Russell Bodenhamer on June 24, 1946 in Columbus, KS. They made their home on part of the old family farm, east of Springfield. To this union, their only child, Clara Bell, was born in 1950. Doris was proud to become a naturalized United States citizen in 1950 as well. Most of Doris’ years were spent being a housewife and mother to her family, and worked on the farm. Her home was always open to family, neighbors, friends, and others who had formerly called the United Kingdom home. Doris was famous for her Sunday dinners, pies, and sweet tea. She kept a beautiful yard and flowers, travelled to Northern Ireland for visits many times thru the years, and enjoyed spending time with all of her family and friends. Doris was steadfast in her Christian faith, attended Strafford United Methodist Church, loved all her church family and they were a blessing to her. She will be remembered for her wonderful accent, kind heart, and sweet spirit.
Doris is preceded in death by her husband, Russell Bodenhamer in November 1971; her parents John and Isabella Wray; her mother-in-law Clara “Maggie” Bodenhamer; brothers-in-law Joe Bodenhamer and Paul “Jack” Campbell; sisters-in-law Dorma Bodenhamer and Annie Bodenhamer; brothers Bill Wray and Sam Wray; sister-in-law Ivy Wray; brothers-in-law Danny Powell, Roy Knox, and Stuart Mackey; grandson-in-law Doug Favor, Niangua; and numerous special friends. Doris is survived by her beloved and only daughter and son-in-law, Clara Bell (nicknamed “Kirby”) and Edward “Eddie” Kindall of Springfield; sisters Betty Knox, Jean Powell, May Mackey all of Northern Ireland; brother-in-law Charles Kenneth Bodenhamer, of Springfield; sister-in-law Mary Margaret Campbell, Strafford; granddaughter Karen Favor of Niangua; great-granddaughter Karlee Favor; and two step-great-grandchildren Kandi and Kory Favor. Doris is also survived by a special dear Irish friend, Clara Bradley, Springfield. She is also survived by many nieces, nephews, and cousins here and overseas as well as many special friends and dear neighbors over the years.
As Doris had her heart in two places, Northern Ireland and America, it was her request to be cremated and interred both at Danforth Cemetery with her husband and in Northern Ireland with her parents. A memorial service will be held at Greenlawn Funeral Home East on Friday, January 29th at 3:30 p.m. In lieu of flowers, donations to St. Jude’s Clinic at Mercy Childrens Hospital, 1235 E. Cherokee St, Springfield MO 65804 or the charity of donor’s choice. The family wishes to express their deepest appreciation for the loving care and kindness in Doris’ last days, provided by the nurses, aides, and staff at Glendale Gardens & Mercy Hospice of Springfield.
Doris is the beloved matriarch of a family that is deeply saddened by her passing. The family is comforted by the love and support of family and friends, and in knowing that she enjoyed a long and joyous life. Doris left a memorable impression on the hearts of those she touched, and will be dearly missed.