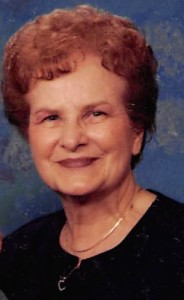 Dorothy L. Pridgen, 88, Springfield, MO passed away Thursday, September 3rd, 2015. She was born November 5, 1926 in Springfield. Daughter of Austie W. and Lillie Mae (Brower) Bayless.
She graduated from Willard High School in 1944. This is where she met her high school sweetheart Walter H. Pridgen and was married September 10, 1949 at Tatum Chapel Baptist Church, where they were dedicated members. Dorothy was a homemaker and enjoyed working as a part-time sales clerk at Sears. She worked there for 47 years until she retired in 2005. She loved spending her time with her family, especially her grandkids, never missing a sporting event or concert.
Dorothy is preceded in death by her husband of 53 years, her parents, and her two brothers Ralph and Loren. She was survived by her daughter Deanna Allen and son and daughter in-law James and Chris Pridgen; her three grandchildren Hallea and Blake Pridgen and Amanda Allen all of Springfield; her sister Helen Smith of Springfield and brother and sister in-law Gerald and Dixie Bayless of Washington, MO; and numerous nieces, nephews, cousins, and great nieces and nephews.
Graveside services will be held at 3:00pm Tuesday, September 8, 2015 at Clear Creek Cemetery. Visitation will be held from 6:00-8:00pm at Greenlawn Funeral Home North. In lieu of flowers, memorial contributions may be made to the Alzheimer’s Association.