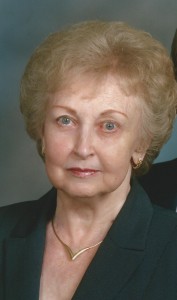 Dorothy Nadean Wallace, age 72, of Nixa, MO, passed away Tuesday, October 28, 2014 at Cox Medical Center South. She was born November 10, 1941, in Chadwick, MO, to William and Ota Hawkins. She graduated from Ava High School. She was united in marriage to Jerry Keith Wallace on October 14, 1960. She and Jerry were members of Park Crest Baptist Church. Dorothy and Jerry owned and operated Wallace Transfer And Storage INC. for over thirty years. Dorothy’s greatest love was spending time with her family, especially her grandchildren.
She was preceded in death by her parents,William Wesley and Ota Elizabeth Hawkins; two brothers, Roscoe Hawkins and Raymond Hawkins; and three sisters, Juanita Collins, Madeana Bray, and Ruth Hursh. She is survived by her loving husband of fifty-four years, Jerry Keith Wallace of the home; two daughters, Marcie Bassett and husband Steven of Nixa and Rachelle Bassett and husband Timothy of Nixa; eight grandchildren; Joshua Kulp, Gabriel Kulp and wife Amanda,Noel McQuaid and husband J.C., Grace Bassett, Noah Bassett, Cole Bassett, Riley Bassett, and Will Bassett; five great-grandchildren, Faith, Jordan, Quentin, Jase, and Josie; and a host of family and friends.
Funeral services will be held at 12:00 p.m., Friday, October 31, 2014, at Greenlawn Funeral Home South, Springfield, MO with Rev. Phillip Housley officiating. Burial will be held in Greenlawn Memorial Gardens, Springfield, MO. Visitation will be held from 10:00 a.m until 12:00 p.m. on Friday, October 31, 2014 at Greenlawn Funeral Home South. Memorial contributions may be made to the Park Crest Baptist Church Youth Department . Services have been entrusted to Greenlawn Funeral Home North, Springfield, MO. Online condolences may be made at www.greenlawnfuneralhome.com.