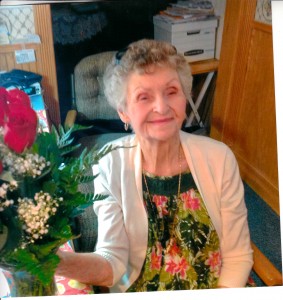 Dorothy Marie Oglesby, 86, of Springfield, MO passed away on Friday December 4, 2015. She was born on October 28, 1929 to Harry and Nellie Bruner in Kismet, Kansas. Dorothy was an avid gardener and loved to bake bread and cook for her family and friends. She was a longtime resident of Springfield and previously managed the men’s department at Katz. Upon retirement Dorothy and Ben traveled extensively in their RV but especially cherished their time as “snowbirds” in Biloxi, MS.
Dorothy was preceded in death by her parents and one brother and one sister. Survivors include: her husband of 58 years, Ben; one son Clifford (Carol) of Rescue, Virginia; daughters: Juanita Arbuckle of Iuka, Illinois and Ruth Story of Houston, Texas; 8 grandchildren, 16 great-grandchildren, and 3 great-great-grandchildren. In addition she is survived by one brother John Bruner.
Visitation will be held Tuesday December 8, 2015 at 1:00 pm at Greenlawn Funeral Home North with a graveside service following at Pleasant Hope Cemetery. Memorial contributions are suggested to the Wounded Warriors Project, PO Box 758517, Topeka, KS 66675.