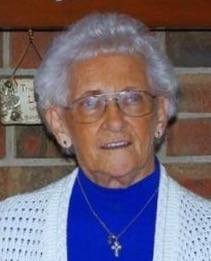 Dottie Spellman, loving Christian wife, mother, grandmother and friend, left this world to meet her Lord and Savior in the early hours of Thursday, June 30, 2016. Dottie was born June 3, 1932 in Ballard, MO to Gordon and Mabel (McComb) Warford. She was raised in Butler, MO along with siblings, Stanley, Norman, and Barbara. She later attended Southwest Baptist College before moving to Springfield. While working as Administrative Assistant to Mr. Neil Wortley at Burge Hospital the mail carrier began telling her about his handsome son serving in the US Navy. At the same time, he was also talking to his son about a cute blonde on his mail route. These two soon became Mr. and Mrs. Max Spellman on September 1, 1956. Dottie worked for Springfield developer John Q Hammons and was given the task of naming streets for a new subdivision, to be known as Southern Hills. Dottie is survived by her husband of almost 60 years, Max Spellman, 3 children, Gayla Spellman (Don Douglas), Ron Spellman, (wife Lisa) and daughter, Lisa Spellman. 7 grandchildren: McKenzie Cranor, Keri Cranor, Colton Spellman, Sarah Rotramel and her husband, Danny, Amanda Conner and her husband A.J. Jamie Butts, and Cory Spellman, and 5 great grandchildren, a sister, Barbara (and Pete) Baser of Villa Ridge, Mo and many nieces, nephews,and wonderful friends and church family from Hamlin Baptist Church, where she has been a member and actively involved since 1968. Dottie was preceded in death by her parents, brothers, and one grandson. The family would like to give a special thanks to her caregivers at Republic Nursing and Cox MICU.
Funeral services will be at 10:00 a.m. Saturday, July 2, 2016, in Greenlawn Funeral Home North, with burial to follow, in White Chapel Memorial Gardens. Visitation will be Friday evening from 6:00 to 8:00 p.m. at the funeral home.