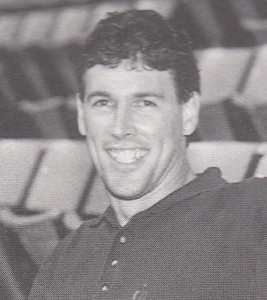 Douglas Hamilton Palmer, age 54, of Springfield, MO passed away on April 9, 2016, after a valiant 13 year battle with brain cancer. Douglas was born on August 30, 1961 in Springfield, MO. Douglas graduated from Parkview High School in 1979 and MSU in 1984. He worked at Hammon’s Student Center for 17 years where he met many lifelong friends.
Douglas was married to Teresa (Dixon) in 1984 and together they had two sons, Hamilton 27, and Harrison 22. Douglas was a health enthusiast and loved teaching others about good nutrition. He loved all sports and participated in several triathlons. He loved nothing better than spending time with his “boys”. They were definitely his pride and joy! In 1980, Douglas accepted Jesus as his Savior and became a member of High Street Baptist Church. He had a heart for missions and was a true “prayer warrior”. Before his illness, he loved teaching the Word of God to the children at church. Douglas fought his fight with a positive attitude and relied on the promises of God to sustain through his journey.
Douglas is survived by his wife of 31 years, Teresa of Springfield, MO; two sons, Hamilton and Harrison, both of Springfield, MO. His parents Stephen and Patsy Palmer, grandmother Irene Palmer, sister Sheila Palmer, brother John and his wife Angela Palmer and Jeff Palmer; all of Springfield, MO. In-laws Jerald and Margy Dixon, Pleasant Hope, MO, brother-in-law, Alan and wife Yvette Dixon, Republic, MO and lastly, several nieces and nephews across the country.
Visitation will be held from 5:30 to 7:30 pm on April 12, 2016 at Greenlawn Funeral Home North. A funeral will take place at High Street Baptist Church at 2:00 pm on Wednesday April 13th. Memorial contributions are suggested to Missions at High Street Baptist Church.