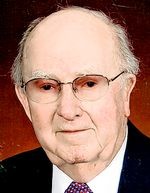 Rev. Duard O. Baldwin, an Assemblies of God minister for almost 60 years, went home to be with his Lord after a long, faithful journey on June 21, 2009. Duard was born on July 7, 1921 in Jerico Springs, Missouri to Bertha Metcalf and Clarence Baldwin. He served in the Marines during World War II. At this same time, he met and married Alice Caroline Doran of Springfield, Missouri. Soon Duard and Alice became pioneer pastors with the Assemblies of God. As well as planting and pastoring several churches, Duard served as an evangelist and a missionary in Honduras before retiring from full-time ministry due to health reasons. Always the “Come-back Kid”, Duard bounced back to be active in real estate and did interim missionary work in Alaska and the Fiji Islands. A faithful husband, father and grandfather, he will be remembered for his poetic humor, determination, and loyalty to the fellowship of Christ. Duard is survived by Alice, his wife of 65 years; four children, Susan Pember and husband Vyrl of Tulsa, Oklahoma, Brenda Stiles and husband Wally of Ozark, Missouri, Randy Baldwin and wife Sonja, of Springfield, Missouri, and Sandi Russo and husband Dale of Beaver Falls, Pennsylvania; as well as eight grandchildren; two granddaughters-in-law; and one grandson-in-law. Joining them are many from his extended family and a host of friends and brethren. Visitation will be from 6:30 to 8 p.m. on Wednesday, June 22, 2009 at Greenlawn Funeral Home South, 441 W. Battlefield, Springfield, Missouri. A celebration service will be held at Evangel Temple, 2020 E. Battlefield, Springfield, Missouri on Thursday, June 23, 2009 at 10:30 a.m. A special thanks to Amber Hopper and Paul Stanek with Community Hospice. Memorial contributions may be made to Community Hospice, 1465 E. Primrose, Springfield, MO 65804.