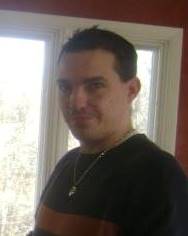 Dustin Reynolds, 35, passed away on April 8th, 2015 due to injuries sustained in an automobile accident. To Dustin, there was nothing more important to him than his family. He leaves behind his loving wife, Amanda Reynolds (Myers), and his three beautiful children, Corbyn (12), Masyn (10) and Makynzee (8). Dustin was the kind of dad, who was always involved. He wasn’t afraid to get his fingernails painted by his daughter, or teach his son’s the way around a MOPAR. He had a smile that was contagious and was always the first one to make jokes and always brighten up your day. Nothing would make him happier than taking the family to the car shows, races, or riding in his Dad’s Duster (Mike’s) which Dustin was named after. He was an excellent chef, and was the man behind the famous Riverside Inn fried chicken. Dustin and his wife have been together for 18 years. They were high school sweethearts and were lucky to find their soul mates within each other at such a young age. They had 18 years of true love, and made a lifetime of memories together with their family. From camping trips, fishing, or family vacations in Florida. They were inseparable and have a love that cannot be broken even in death. Dustin and his identical twin brother Justin, were best friends since birth. They have always been inseparable and where one was, the other was not far behind. They had such a deep connection they knew what the other was feeling and thinking…they were each other’s best friend. They came into this world together and left this world together doing what they loved. Dustin was the kind of big brother to his sister who would always give her a hard time every time he could, just like older brothers should (Mykala) was 16 years younger than Dustin. He always looked out and protected her, and loved her unconditionally. Dustin is also survived by his parents, Nancy and Mike Reynolds, Grandparents Bonnie Reynolds and, Naomi and Sam Hoover of Republic, identical twin brother Justin and his three children Kadyn, Mattyx, Landyn, sister Mykala, and many other cousins, aunts and uncles. Proceeded in death by his grandfather Robert Reynolds. Dustin lived his life full of love and honesty which we will all carry with us forever. The funeral arrangements will be held at Greenlawn Funeral Home North, in Springfield, Missouri Wednesday, April 15, at 1:00 pm. In Lieu of flowers there has been an account set up at any Empire Bank location to help the family with costs from this tragedy.
“In the end, it’s not the years in your life that count, it’s the life in your years.” Abraham Lincoln.