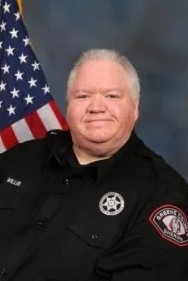 It deeply saddens our family to announce the death of our dear son, brother, friend, and husband, Dwight Eugene Willis.  He was 56 years old, born July 4, 1964 to Toby and Shirley Willis of Springfield.

Dwight married his childhood sweetheart, Pattie White Willis, on March 17, 1988.  Dwight was born and raised in Springfield, MO and was a 1982 graduate of Central High School.  For 19 years he worked at the Battlefield Mall in housekeeping/maintenance from 1982-2001.  In 2001 he began his career at the Greene County Justice Center until his death, November 22, 2020, after a brief COVID illness.

Surviving in addition to his wife, is his father Toby; two siblings, his sister Lisa Gott, wife of Eddie Gott of Springfield and his brother Darin Willis also of Springfield.  He was preceded in death by his mother, Shirley Ann Willis.

Dwight was a true American Patriot.  Above and beyond, he was known for his lifelong love for his (little) wife, Pattie Sue.  In addition, his love for his kitties, Dallas Cowboys, his country and God.

Service for Dwight will be at 11:00 am Saturday November 28, 2020 at Greenlawn Funeral Home East. Following the service he will be laid to rest at Old Boston Cemetery in Oldfield, Missouri. Visitation will be from 6:00 to 8:00 pm Friday, November 27, 2020 in the funeral home.