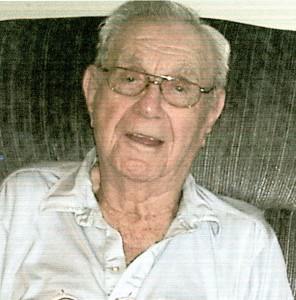 Edgar L. Dellow 91, of Mt Vernon, MO., passed away on January 6, 2015. Edgar was born on April 12, 1923 at Harford Mills, New York. Edgar proudly served his country in the Air Force during WWII. He is preceded in death by his wife, Mary, his son Mark, both parents, Walter Lee Dellow and Agnes May (Horton) Dellow and two sisters, Alice Mulvaney and Shirley Sovocool. He is survived by two daughters, Mary Bush of New York and Connie Reed of Virginia, step-daughter Kathleen Hufford of Miller, MO, step-son Kenneth Fox of Tucson, AZ. As well as his brother, Walter Dellow and sister Dorothy McAllister, many grandchildren, nieces and nephews . Visitation will be January 8, 2015 from 11am to 12pm at Greenlawn South Funeral Home at Campbell and Battlefield, in Springfield MO. Graveside service and burial with be at the Missouri Veterans Cemetery at 1pm, January 8, 2015.