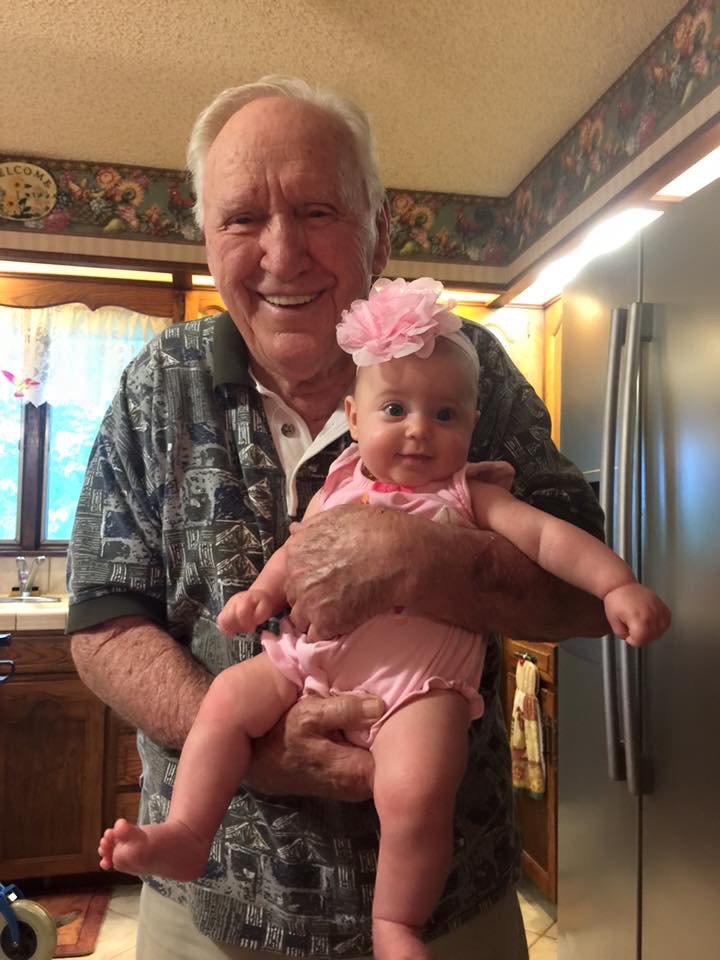 On October 17, 2019 while resting peacefully, Edward Jacob Williams was called home. Edward Jacob Williams was baptized on December 26, 1925. He grew up farming in Colorado and later Nebraska before enlisting in the United States Marine Corp. In November of 1943, Edward fought with the Marines 1st Battalion in the Pacific theater during World War II seeing action in Okinawa and The Ryukyu Islands. Edward achieved the rank of Corporal before being honorably discharged in June of 1946 in San Diego, California. Edward is a proud Marine and never missed a chance to attend Veterans Day celebrations with his grandchildren and great – grandchildren.
It was in San Diego where he met the love of his life, Marian Norma Lee. They were married at the courthouse and rode away on Ed’s Harley Davidson on September 17, 1946. Edward and Marian’s union was blessed with 4 children, Pamela, Randall, Gary, and Patti.
Edward apprenticed in the terrazzo trade and became only the third Terrazzo man in the United States. Edward continued and prospered in the Terrazzo and tile trade throughout the country. In California he was the owner and operator of a fumigation and termite company. There was never a project Edward wouldn’t take on. Some of Edwards proudest projects were the Terrazzo floor at the entrance of the St. Johns Hospital in Springfield, Missouri and the stairs in Marvel Cave at Silver Dollar City in Branson, Missouri.
Edward has always been an active and integral member of every community he lived in. While in Anaheim, California Edward served on the board of the YMCA and Anaheim Memorial Hospital. He was an Anaheim Greeter for Glad Handers and was a member of the Double 11 Club, as well as being heavily involved with the California Angels, LA Rams, and Disneyland. Edward was also active in the VFW. Edward was a Freemason and a member of Gate of the Temple Lodge No 422 and a proud Shriner of Abou Ben Adhem Temple in Springfield, Missouri where he enjoyed playing in the band.
Edward was an avid fisherman, diehard Nascar fan, animal lover and loved being surrounded by family and friends. Edward was always ready to tell a great story. Despite his many activities, accolades and accomplishments, family and friendship were always the most important thing to him. Edward was a devoted family man, fierce friend, and a kind, safe spirit.
Edward was born on October 18, 1925 in Sedgewick Colorado to William and Katherine Williams. Edward was one of eleven children (8 boys and 3 girls) Edward was preceded in death by his parents, brothers: Raymond, Robert, Harold, and Albert, two step-brothers Jim and David, and grandson Jonathon. Edward is survived by his wife Marian; brothers: Walt, Ron, and Leonard, sisters: Edith Tesarek, Esther Derosia, and Ethlyn Spire; daughter Pamela Mitchell and her daughters Melanie Ackerman(husband John) and Amanda Whitman (husband Daren); son Randall (wife Nancy) and their sons Christopher (wife Nicole) and Joshua (wife Kandyse); daughter Patti Melton (husband Mike) and their children Brittany Snyder (husband Mike), Kristen Maddux (husband Kevin) and Mike (wife Nichole); son Gary (wife Marlene) and their children Eddie, Nathan (wife Celia), Elizabeth, Zion, Brendan Dusha (wife Kenna) and Jared Dusha (wife Stacy). Edward is also survived by 22 great grandchildren, numerous nieces, nephews, and cousins.
The family would like to extend their heartfelt gratitude to all of Edwards caregivers including Visiting Angels, Maranatha Village, Brookhaven, and Phoenix Hospice.
A visitation for Edward will be held at Greenlawn Funeral Home North on October 25, 2019 from 10:30 a.m. to 11:30 a.m. with a funeral service immediately after. Burial will be at the Missouri Veterans Cemetery following his funeral service at 1:00 p.m.
In lieu of flowers, the family asks donations be made to the Abou Ben Adhem Shriners travel fund: 601 St Louis, Springfield MO 65806, 417-869-9164; ASPCA: https://www.aspca.org/ways-to-give ; or Ozarks Honor Flight https://www.honorflightoftheozarks.org/donate/