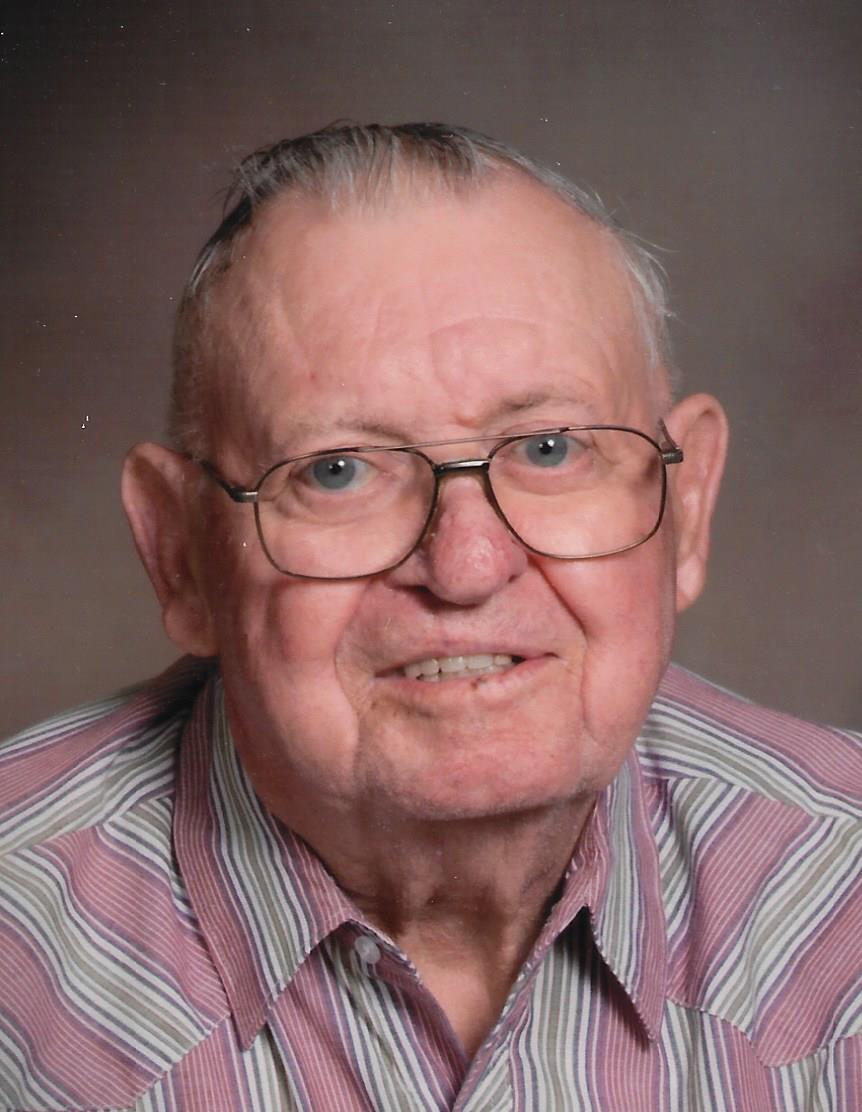 Edward John Cahoj, loving husband, father, grandfather, great-grandfather and great, great grandfather, of Bolivar, Missouri, passed away peacefully with his beloved wife and family by his side at Citizens Memorial Hospital on November 23, 2019. He was 89 years old.
Ed was born near Beardsley, Kansas, on July 29, 1930, to Joseph and Mary (Dvorak) Cahoj. He was one of ten children. When he was in second grade, his family moved to the farm near McDonald, Kansas. While Ed did not find academics to be his favorite pastime, he excelled on athletics and lettered in football, basketball and baseball. He was selected to the All High Plains Team in football as an end. In his free time, Ed could be found with his best friend and brother, Leonard, doing the things they enjoyed.
On August 8, 1951, Ed married Marjorie Haller. To this union, eleven children were born.
On February 18, 1972, Ed married the love of his life, Virginia Gilliland. To this marriage, he added four stepchildren.
From the time of his youth, Ed was a hard worker. At a young age he began by hiring out to area farmers. Later, he purchased the home farmstead from his father and raised his family there.
Ed was a wise, innovative and successful farmer, cattleman and entrepreneur. His many ventures, included being an outstanding member and receiving numerous awards for Archer Oil, DeKalb Seed and National Farmers Organization. He was a major force in establishing the NFO Collection Point.
As a gifted businessman, Ed obtained investors and drilled his first oil well in 1980, thereby establishing Cahoj Oil and Gas. He was not a greedy man and freely included not only family, but friends and acquaintances in becoming partners to share in the prosperity. Many benefitted from his kindness and generosity.
In 1982, Ed and Virginia moved to Missouri, a long held dream of Ed’s. They lived near Humansville, MO for a short time before settling in on their ranch near Bolivar, MO, where they remained until his death.
Ed loved checking cattle, was an avid golfer, and enjoyed clearing brush and trees with his CAT. He took pride and joy in family visits, especially when he would cook up a big batch of catfish his children caught from his fishing pond. In earlier years, he enjoyed traveling with his wife. He also enjoyed telling a good joke, a cold beer, an episode or two of All In The Family, and sharing stories of his childhood.
Ed is reunited in Heaven with his much loved mother, who he always referred to as an angel, his father, daughter, Yvette Hartzog, Siblings Emmery, Leonard, Bill Cahoj, and Henrietta Spindler.
Left to honor and celebrate his life, well-lived is his beloved wife, Virginia, of 47 years. His ten children and four step children, Philip (Waynita), Marjorie Richardson (Larry), Kenneth (Joyce), Joseph (Terri), Sheila Geist (Joe), John (Michelle), James (Kendal), Niceta Farber (Randy), Edward L. (Patty), Janelle Cahoj, Sue Pollman, Linda Ricks (Steve), Dan Pollman, and Deane Christy (Jackie), son-in-law, Harold Harteog, siblings Henry, Cecelia Allen, Agnes Sabatka, Mary Ann Reinert and Carmelita.
Ed often said he had many miracles in his life. In addition to all of the already stated, he adds 30 grandchildren, 9 step grandchildren, 50 great grandchildren, 9 step great grandchildren, 3 great, great grandchildren, and a multitude of nieces, nephews and friends.