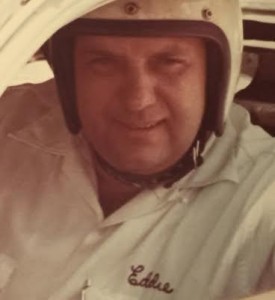 Edward “Big Eddie” Joseph Williamson Jr., husband, dad, papa, master sergeant, race car driver, welder, pipefitter, and competitive sportsman, passed away in his sleep Monday, June 13, 2016 in Springfield, Missouri. He was 87. Edward Joseph Williamson Jr. was born February 7, 1929 to Edward Joseph Sr. and Thelma Dawson Williamson in Springfield, Missouri.
Educated through the Catholic School system in Springfield, Missouri, Eddie joined the United States Army in August of 1950 where he became a master sergeant, serving his country honorably; he was awarded; 4 Bronze Medal Campaign Stars, a Korean Service Medal, and an Occupation Medal for his time in Japan, and a United Nations Service Medal. After the war, he returned to civilian life and made a career as a welder and pipefitter at missile sites across the United States.
Eddie was an active member of the community. A licensed HAM Radio Operator, and for more than 50 years he served the Blue Lodge as a 32nd degree Mason. In conjunction with his Masonic ties, he was a Shriner at the Abou Ben Adhem Temple of Springfield, Missouri where he served as a Camel Herder.
On August 27, 1950 in a private service in Eureka Springs, Arkansas, Eddie married the love of his life, Eva Mary Tuttle. Until his death, for more than 65 years, he and his sweetheart remained partners.
Nonetheless, “Big Eddie” was a talented and fierce competitor. In his youth, he excelled in a myriad of activities. In his teens, he once reigned as Golden Gloves Champion. Concurrently, he represented the area at statewide roller skating competitions where he won numerous medals for speed skating and couples dance skating.
His passion for competition grew with him into adulthood and he never settled for mediocracy. In 2009, he made his family proud when he was inducted into the Missouri Racing Hall of Fame as a Legend to the sport. Back in the day, many local fans cheered for Eddie as he rounded the turns in the Dr. Pepper stock car. Nevertheless, the games didn’t stop at the Ozark Empire Speedway, he was also, a Missouri Dirt Track champion, a darn good bowler, and one heck of a fast-pitch softball catcher. He took pride in catching Tom Doyle’s power pitches. In later years, Eddie was best known for his tremendous mastery of a pool cue and up until 12 years ago when a stroke robbed him of the use of his left arm, he brought many opponents to their knees.
Eddie was a beloved family man. His loved ones will think of him fondly and miss him dearly. His wife Eva and his sons and their families’ survive him: Edward “Eddie” Lee Williamson, his wife Angie Letterman Williamson and their sons; Justin Ryan Andrew Williamson, his wife Julianna Cameron Williamson, their daughter Lacy Grace Williamson; Edward “David” Williamson and Ian Sutton Williamson. Daniel “Danny” Williamson, and his son Jason; his brother, Frank Lee Williamson, his wife Mary Williamson, and many nieces and nephews.
His parents, Edward Joseph Sr. and Thelma Dawson Williamson, and a younger sister, Mary Elizabeth McElhaney, preceded Eddie in death.
Visitation will be held Thursday, July 7, 2016, from 6 to 8 p.m. in Greenlawn Funeral Home South. Funeral services will be at 9:30a.m. Friday, July 8, 2016 in the funeral home with graveside services at 11:00a.m. in Missouri Veterans Cemetery in Springfield, Missouri.
In lieu of flowers, donations can be made to the Springfield Workshops (SWI Solutions).
Rest peacefully Papa!