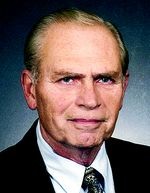 Edward William Gotti
Dr. Edward William Gotti was born August 9, 1941, in Bayonne, N.J., to Constantine and Louise Gotti. He passed away in his home in Springfield, Mo., on August 25, 2009. A young man determined to succeed, he grew up in Scotch Plains, N.J. He attended Xavier High School in New York, and went on to Penn State University, where he met his wife, Aija. They married in Glen Rock, Penn., on June 27, 1964. Dr. Gotti earned his M.D. degree at the University of Florida – Gainesville College of Medicine. He specialized in the cutting edge field of Nuclear Medicine at Washington Hospital Center. He was certified in Internal Medicine and Nuclear Medicine, and was a member of the American College of Physicians. Dr. Gotti served in the Army at Walter Reed Medical Center from 1971 to 1973. Recruited to St. John’s Hospital in 1981, Dr. Gotti brought state-of-the-art Nuclear Medicine technology to serve patients and their physicians in Springfield and the surrounding area community. Well recognized achievements include his seminal research work in isotopic marking of liver tumors, as well as the use of tumor specific radio-isotopic molecules to selectively destroy tumor cells. He also provided techniques for locating and imaging rare tumors, which continue to provide priceless guidance to successful definitive therapy. Additional applications of Nuclear Medicine techniques in cardiovascular, renal, bone and metabolic diseases remain highly successful. An open, unassuming personality and unfailing intellectual honesty amplified his great knowledge. Close colleagues reflect that he was always available, focused and on-target, all constants as unvarying as the high principals upon which he based his entire life. Dr. Gotti enjoyed boating, his dogs, his fish, spending time with his family, and a 27 year project of turning a run down farm into a home of comfort and beauty. He is survived by his wife, Aija; and their daughters and families, Jennifer A. and Scott Erickson of Kuna, Idaho, and their children, Jessica and Morgan, and Nicole L. and Edward Hernandez of Grayslake, Ill., and their children, Marisol, Antonio and Arianna. He is also survived by his sister, Ann Rauscher of N.J., and her children, Tina, Mary and Sue. Ed was generous and kind, a wonderful husband and father, and an inspiring teacher to his children and those around him. He loved his family deeply and was deeply loved and respected by those lucky enough to know him. He will be missed. A small private service will be held Saturday, August 29. Memorial contributions may be made to The Kitchen or Crosslines.