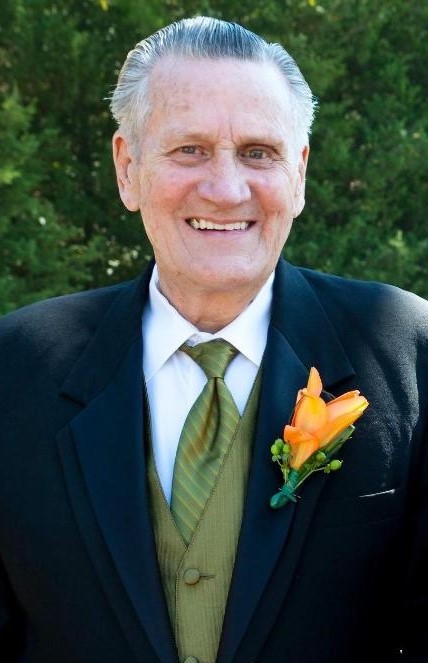 Edwin D Fisher, 93, of Springfield, Missouri went peacefully surrounded by family on December 20th, 2019. He was born on December 24th, 1925 to George and Evelyn Fisher in Santa Ana, California. Mr. Fisher was an avid golfer and member at Fremont Hills Country Club for several years. Mr. Fisher was a veteran and served in the Merchant Marines, the Army Air Corp as a paratrooper with the rank of Corporal. He also served in the Navy aboard the USS Missouri as a fireman during the Korean Conflict. He was an over the road truck driver for Frozen Food Express and Parkhill truck lines.
He is survived by his wife of 67 years, Juanita Fisher; his son Dale and wife Cathy of Springfield; his grandson Ryan and wife Brandie of Fremont Hills; his two great-granddaughters, Kennedy and Emersyn; and his granddaughter Courtney of Omaha, Nebraska. He is also survived by his brothers: Clyde, Bill and Ronnie; as well as many family and friends.
Services for Edwin will be at 12:30 pm Thursday, December 26, 2019 at Greenlawn Funeral Home East. Interment with full military honors will follow at Missouri Veterans Cemetery. Visitation will be from 11:30 to 12:30 prior to the service.
In lieu of flowers, donations can be made to the Honor Flight of the Ozarks in his name. Online at: http://www.honorflightoftheozarks.org/donate/
Or through the mail:
Honor Flight of the Ozarks
P.O. Box 3964
Springfield, MO 65808