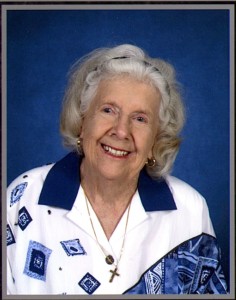 Eileen Agnes Shannon Machmuller formerly of Branson passed away on January 18, 2016 in the home of her son in Nixa Missouri. Eileen was 93 years old. Eileen was born on March 11, 1922 in Norfolk, Nebraska. She was preceded in death by her parents Howard and Amanda Shannon, 3 sisters, Delores King, Leona Rannals and Mary Jane Gaines and 1 brother Dan Shannon and her husband Leo Henry Machmuller Sr. Eileen and Leo were married for 68 years.
Eileen leaves behind a son Leo Machmuller Jr and wife Kathy, a son Richard Machmuller and wife Celeste and a daughter Cheryl Coffelt, seven grandchildren Matthew Machmuller, Megan Boeck, Michael Machmuller, Jacob Coffelt, Jessica Silvey, Julie “JJ” Coffelt and Joel Coffelt and seven great grandchildren.
Eileen attended Sacred Heart school in Norfolk Nebraska where she earned honors in English and Latin. She later finished Beauty School and spent her working years as a Stylist and operated several Shops the last being Flair Styling Salon in Grand Island Nebraska.
When Eileen and Leo were in their early 60’s they started a new venture and built the Amber Light Motor Inn in Branson Missouri. Though there was much hard work involved, there were also many wonderful memories of fun family times there. They entertained family and friends around the pool and had many BBQ meal there as well. Plus the grandkids loved to sled on their driveway.
In 1993 they built their dream home at Pointe Royale in Branson. Their home overlooked the 6th green. They both enjoyed daily golfing. Eileen enjoyed assisting many ladies in beginning their love for golf. Eileen holds the honor of actually making two hole in ones. Eileen was also an avid bridge player. She and Leo were very involved with their Church, Our Lady of the Lake Catholic Church in Branson. Eileen volunteered her time and talents in many capacities but her most favorite was to care for the Church linens. Eileen’s most favorite times were those shared with her family, her Church and on the golf course. She loved music and sang often.
Her services will be at 11:00 AM, Thursday, January 21, 2016 at the Our Lady Of The Lake Catholic Church with Fr. Rick Jones officiating. Burial will be in the Missouri Veterans Cemetery at a later date. Arrangements are under the direction of Greenlawn Funeral Home of Branson Missouri. Visitation will be from 5:00 until 7:00 PM on Wednesday with Rosary services at 7:00 PM at Greenlawn Funeral Home in Branson.
In lieu of flowers memorials are suggested in her memory to the Our Lady Of The Lake Catholic Church in Branson, Mo.