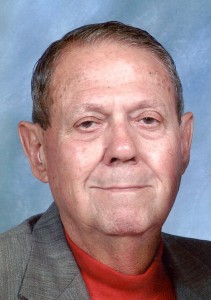 Eldon Virgil Denney, 85, passed away Thursday, August 27, 2015 at Magnolia Square in Springfield, Missouri. He was originally from Ava, Missouri. Eldon was born on June 1, 1930 at his home in Douglas County, Missouri to Orville and Mona (Hailey) Denney.
He attended and graduated from Ava High School in 1947, and served in the National Guard during the Korean War. Eldon worked for the U.S. Post Office starting as a postal clerk on the Kansas City Southern and then at the Main and Glenstone Post Offices. He retired from the Post Office in 1987 after 33 years of service. He married the love of his life Rosalee Letsinger on June 15, 1950, and they were married 65 years. Eldon was a Scoutmaster for Boy Scout Troop #212 from 1971-1973; he was also a member of Schweitzer United Methodist Church since 1968. Eldon had many hobbies, but he loved fishing, hunting, camping, and being outdoors. He was a proud friend of Bill W. for 33 years.
Eldon is preceded in death by his parents; a sister, Wilma Neldine Denney; and a brother, Marvin Denney.
Eldon is survived by his loving wife, Rosalee Denney; two daughters, Kathrine Bradley (Tim) and Vickie Loose (Rock); son, Paul Denney (Liz); four grandchildren Adam Bradley (Liz), Mollie Bradmon (Jay), Mary Hannigan (K.B.), and Mira Denney; four great grandchildren, Evyn & Teagan Bradley, and Patrick & Katie Hannigan; two brothers, James Denney (Martha), Ron Denney (Pat); sister-in-law, Karylon Denney; and many other family and friends.
A visitation will be held on Sunday, August 30, 2015 from 2:00-4:00 p.m. at Greenlawn Funeral Home East 3540 E. Seminole, Springfield, Missouri. Funeral services will be held Monday, August 31, 2015 at 2:00 p.m. at the funeral home with internment to follow at White Chapel Memorial Gardens in Springfield, Missouri.
In lieu of flowers, donations can be made to Mercy Hospice at 1570 W. Battlefield, Suite 110, Springfield, Missouri; The Boy Scouts of America, Ozark Trails Council; or charity of choice.