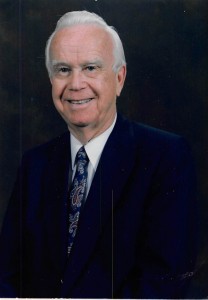 Eli Mathew Harju, 95, passed away December 31, 2015, in his home in Springfield, MO. Eli, the youngest of 12 children, was born November 2, 1920, in Rudyard, MI, to Finnish immigrants Isaac and Sofia Harju.
After high school, Eli enlisted and served almost five years in the Army Air Corp during WWII. His next endeavor was the University of Michigan where he graduated in 1949 with a BA in Business Administration. During a visit home, he made a life changing decision to accept Christ as his Savior.
Feeling God’s call into full time ministry, Eli moved to Springfield to attend Baptist Bible College. It was here that he met and fell in love with Mary Louise Burton from Cincinnati. They were married on July 30, 1954.
A life of full time ministry began as a college professor at Baptist Bible College in Springfield, MO and at Pacific Coast Baptist Bible College in San Dimas, CA. He was awarded 3 honorary doctorate degrees; served as Dean of Education; and later was Assistant to the President at BBC. During this time he also served as the pastor of Crane Bible Baptist Church in Crane, MO, Olivet Baptist Church in Lynwood, CA, and Bethany Baptist Church in Whittier, CA. He had the opportunity to teach and preach on many mission fields throughout the world.
His greatest desire was to be used by God to tell others of Jesus Christ. His greatest fear was that he had not done enough for this generation for the cause of Christ. However, he knew his security in heaven was not dependant on the work he had done on earth, but on the work Jesus Christ had done for him on the cross.
His family looks forward to a heavenly reunion as he has left behind his wife of 61 years, Mary Louise Burton Harju; three children, Victoria (William) Hoving of Great Britain, Timothy (Melissa) Harju of California, and Cynthia (Michael) Johnson of Virginia; eight grandchildren, Matthew (Lauren) Hoving, Brittany (Jeremy) Jackson, Ashley Hoving, Noah, Zachary & Samuel Harju and Christopher & Eric Johnson; and three great grandchildren, Elsie & Nora Hoving and Piper Jackson.
Visitation will be Thursday, January 7, from 6-8 pm. Memorial service will be Friday, January 8, at 1 pm. Both to be held at High Street Baptist Church, 900 N Eastgate, Springfield, MO 65802. Interment to follow at Greenlawn Memorial Gardens.
In lieu of flowers donations may be made to High Street Baptist Church’s Foreign Missions Fund.