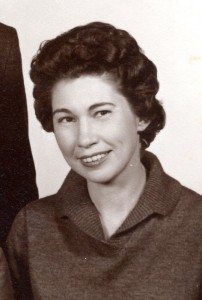 Elizabeth Marian Bond, age 90, passed away Friday, September 4, 2015, in Springfield, Missouri. Elizabeth was born November 2, 1924, in Aldrich, Missouri, to George and Lucile (Davis) Shuler. She grew up on a dairy farm, graduating from Marian C. Early High School in 1942. The eldest of five siblings, with three energetic brothers and a lively sister, Elizabeth developed both an engaging personality and a ready sense of humor. Retelling stories from that time, she proudly remarked, “We had fun.”
During the war years, she served as an inspector in a Chicago Motorola plant. Following the war, Elizabeth married Junior Bond of Morrisville, Missouri, on May 12, 1946, in Springfield, Missouri. For a decade following the birth of their two children, Elizabeth was a homemaker, sewing, cooking, canning, and transporting. Later, she was a professional seamstress, first at Moore’s Tailor Shop and then at Sears in menswear.
Though handicapped by a stroke in later years, Elizabeth’s soul remained that of the dynamo who baked pies, mended clothes, and cooked legendary meals. She loved her family, loved her friends, and was faithful to the Christian Church, Disciples of Christ. For many years, she was a devoted member of the Central Christian Church Quilting Club. Elizabeth especially loved fishing, she and Junior heading to their Pomme de Terre place to fish for crappie at every opportunity.
Elizabeth was preceded in death by: her parents, George and Lucile Shuler; brother, Victor Crone “Bill” Shuler; brother Kelton Shuler; and brother George Marshall “Marsh” Shuler. She is survived by: her loving husband of 69 years, Junior; son, Terry (Donna); daughter, Debbie (Mike); granddaughters, Leigh Strope and Laura Naegele; grandsons, Brandon Strope (Karen) and Ryan Strope (Allison); sister, Linda Gann; sister-in-law, Peggy Shuler; a dear friend, Martha Reed; six great-grandchildren; and numerous nieces and nephews.
Visitation will be held at Greenlawn Funeral Home South in Springfield, 5:00 – 6:30 p.m., Tuesday, Sept. 8. Burial and graveside service will take place 10:00 a.m., Wednesday, Sept. 9, at Pleasant Ridge Cemetery, Aldrich, Missouri.
The family of Elizabeth is deeply grateful to the staff of Springfield Rehab their excellent and loving care.