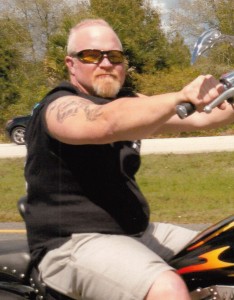 Eric Wade Teague, age 43, of Springfield, MO, passed away Saturday, May 28, 2016. He was born June 25, 1972, in Springfield, MO, to Shelby and Donna (Doyle) Teague. He was an avid fly fisherman and enjoyed bow hunting and He had a love of motorcycles.
He was preceded in death by his father: Shelby Gene Teague, his grandfather; John Doyle, grandparents; Milford and Won Edith Teague, and his uncles Kenny and Kevin Doyle. He is survived by his wife, Tawana Melissa Teague, his children; Trey Michael Anthony, Maddison Taylor-Shelby Teague, and Brayden Riley Teague, his mother; Donna Lou Gray, step-father; Michael Dean Gray, sister; Krystal Baker, his brothers; Brad W. Snyder and Mathew Gray,his grandmother; Mary Lou Doyle, and his loving nieces and nephews.
Funeral services will be held at 2:00 p.m. Saturday, June 4, 2016 in Greenlawn Funeral Home North, 3506 North National, Springfield. Burial will be held in the Ash Grove Cemetery. Visitation will be held from 6 to 8 p.m. on Friday, at the funeral home. Services have been entrusted to Greenlawn Funeral Home North, Springfield, MO. Online condolences may be made at www.greenlawnfuneralhome.com