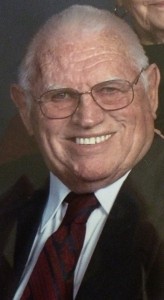 Ernest C. Schlichting, 92, of Camdenton, Missouri, formerly of Branson, Missouri, died Friday, May 8, 2015 at the Osage Beach Rehab and Care Center.
Ernie was born August 30, 1922 in St. Paul, Nebraska, the son of Ernest C. and Emma Schlichting
During World War II, Ernie served his country in the Merchant Marines. On September 8, 1946, in Sedalia, Missouri, he married the love of his life, Margaret Shanks and they spent 68 years together. Ernie and Maggie owned and operated Schlichting’s Paint in Branson from 1962 to1986. Before that he worked with Cook Paint and Varnish as an Architectural Salesman in Springfield, Missouri.
He was an active member of Faith Lutheran Church in Branson for 52 years, where he served in many capacities. Upon moving to Camdenton in May, 2014. Ernie and Maggie became members of Peace Lutheran Church in Greenview, Missouri.
Ernie was a member of the Branson-Hollister Lions’ Club for 50 years and served as the District Governor of 26H in 1996-1997.
He is survived by his wife Margaret (Maggie), 12 nieces and nephews, 19 great nieces and nephews, 7 great-great nieces and nephews and countless friends. He was preceded in death by his parents, two sisters, one brother-in-law; Anna Mae and Charles Wingate and Emmalee Miller of Sedalia, one niece, Judy Rissler of Lexington, Missouri and one nephew, Michael Wingate of Camdenton.
Ernie will be greatly missed by his many friends and family.
“Celebration of Life” service will be held at Faith Lutheran Church in Branson, Missouri, May 21 at 1:30 p.m., with Pastor Joel Krueger officiating. Memorials may be made to the Branson-Hollister Lions Club: memo-“Ernie’s Memorial Fund”, which will be used at a later date for a worthy cause.
At Ernie’s request, cremation arrangements were under the direction of Greenlawn Funeral Home of Branson.