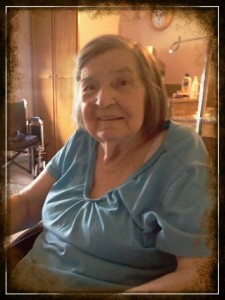 Esther Marie (Davis) Scurlock, age 89, of Huron, MO, passed away Wednesday, October 22, 2014, at Citizens Memorial Healthcare Facility, after losing her first fight of a long illness. She was born December 20, 1924, in Freedow, OK, to Manlove and Esther (Carter) Davis.
She was a member of the Fairview Methodist Church. She was an amazing strong woman who survived a lot. She had the biggest heart for family, friends, and even her animals she had. She never showed weakness if she could help it. She was there for everyone and put everyone before herself. She loved her children and grandchildren very much, and always gave a card for they’re birthdays. She went through a lot and won a lot of fights and finally she had to lose one to be with the “Lord”, not to be in pain, looking over her loved ones and friends that were there for her always.
In the 80’s and 90’s Esther’s most precious joys of her life were to help take care of her grandsons Michael Allen and her own special “Angel” Christopher Wayne. Her and Michael would put “Chrissy” (Chris) in his red wagon and go downtown Bolivar Square to Wades Grocery Store.
She was preceded in death by her parents; her husband Con Scurlock, five brothers: Henry, Harvey, T Burk, Charles, and Manlove Davis, Jr.; and one sister Elizabeth Ross.
She is survived by two sons: Calvin Hanson of Jefferson City, MO, Gregory Cooper and daughter in-law DeAnna Cooper of Bolivar, MO; three grandchildren: Michael Cooper and Fiance Christina Lamb, Christopher Cooper, and Rachel Matti and husband Richard Jr. all of Bolivar, MO; great grandchildren: McKenzie, Bryson, and Justina all of Bolivar, MO; as well as many other relatives and friends.
Funeral services will be held at 1:00 PM, Friday, October 24, 2014, at Pitts Chapel Bolivar, MO, with Pastor Ted Bachman officiating. Burial will follow at Crestview Cemetery, Bolivar, MO. Pall bears will be Gregory Cooper, Michael Cooper, Bill Wolf, Billy Wolf, Jeremy Gilden, Richard Matti, Jr., and Gene Dortch. Visitation will be held one hour before service from 12 to 1:00 PM. on Friday, October 24, 2014, in the funeral home. Memorial contributions may be made to the: Angleman Syndrome Foundation: 75 Executive Drive, Suite 327 Aurora, IL 60504.
Arrangements have been entrusted to Pitts Chapel Bolivar, MO.