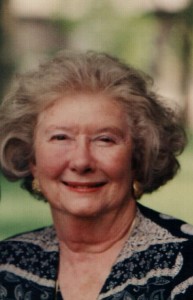 Ethel “Ruth” Pursley, 89, passed away June 15, 2015 at The Montclair Retirement Community in Springfield, MO. She was born October 7, 1925 in Springfield, MO to Frank and Daisy (Cunningham) Waddell. She is survived by her four children: Doug (Janet) Pursley, Springfield, MO, Richard (Vicki) Pursley, Okemos, MI, Mary Murphy, Vallejo, CA, and Julie Dooling (partner, Steve Glass), Ozark, MO and their children and grandchildren. She is also survived by sisters-in-law Joan Ewing, Springfield, MO and Lou Venia Waddell, Willard, MO.
Preceding her in death was her devoted husband, Glen, her parents Frank and Daisy, infant brother Harry Waddell, brother Raymond Waddell, and sister Sue Harper. Also preceding her in death were brother and sister-in-law Ray and Wanella Pursley, brother-in-law Winston Ewing, brother-in-law Gene Harper, brother-in-law Eddie Michael, and two nephews: Mark Harper and Mike Ewing.
Ruth grew up on a farm north of Willard, MO. Because of her slight build as a child, someone with a sense of humor nicknamed her “Hunkie.” That family nickname stuck with her for her entire life. Following graduation from high school during World War II, she worked as a medical transcriptionist at the O’Reilly General Army Hospital (now Evangel University).
Ruth and Glen married on August 9, 1949. They enjoyed nearly 62 years together. They moved to Blacksburg, VA after their marriage and later to Fayetteville, AR. Ruth’s life in the 1950’s was full with raising children, socializing with friends, and working part-time. In 1960, the family moved to Willard, MO, and two years later, established a dairy farm just down the road from her childhood home. It was during that time that she resumed her medical transcriptionist career. She retired from Cox South after many years of service in the radiology department. Following retirement, she owned and operated a medical transcription company along with her daughter, Julie. Ruth continued to transcribe from her home in Springfield until the age of 80.
Ruth was a kind, generous person, and loved by many. One of her grandchildren once referred to her as a “big tub of laughter.” People were drawn to her personality. She could strike up a conversation with a complete stranger and it would seem as though she’d known that person her entire life. She could have started her own employment agency, having found jobs for all of her children at one time or another as well as finding work for many other friends and relatives. She led by example and taught her children the value of a work ethic.
She loved her family and enjoyed spending time with her children, grandchildren, and great-grandchildren. She was a fan of the St. Louis Cardinals and Arkansas Razorbacks football. Cooking was her hobby. Her fried chicken, scalloped potatoes, and cinnamon rolls were rivaled by none. She enjoyed discussing politics and was not bashful about expressing her opinion. She will be dearly missed.
The family wishes to extend special thanks to Mercy Hospice and to The Montclair for their loving and caring attitude toward our Mom over the last one year and four years respectively.
Visitation will be from 5:00 – 7:00 p.m. on Thursday, June 25, 2015 at Greenlawn Funeral Home South, 441 West Battlefield, Springfield, MO. A memorial service will be held the next day, Friday, June 26th at 11:00 a.m. at Greenlawn Funeral Home South.