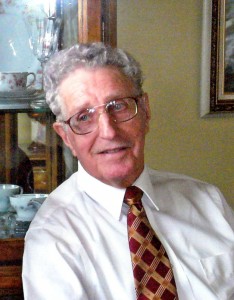 Eugene James Lehar, 90, passed away on Wednesday, April 8, 2015, in Springfield, Missouri. He was born September 17, 1924 to Rudolph and Marie Lehar. Eugene served in WWII from 1943-1945. In 1967, he married his first wife Jessie Jo. He retired from Paul Mueller Company in 1972. After retirement, Eugene raised cattle, and he did repair welding for friends. In 2009, he married his second wife Betty.
He was a member of the Sunset Church of Christ. Eugene is an avid Nascar fan, and has a deep love of country/bluegrass music.
Eugene is preceded in death by his first wife Jessie Jo Willoughby, who passed away October 20, 2008 after 41 years of marriage; his daughter, Jacqueline Ann Stone; his parents; his brother, Rudy; and his 3 sisters, Idelen Criger, Dorthy Shaw, and Jo Ann Lehar.
He is survived by his current wife, Betty whom he married in December of 2009; his son, Gary Eugene Lehar;his step-son and wife, Jim and Ramona Brame; his step-daughter and husband Diana and Michael Hunt; his step-grandchildren, Brittany Aguirre and her husband Toby, Lindsay Witcofski and her husband Hayden, Dale Brame and his wife Angel, and Shellie Brame; his step-great grandchildren, Elwynn Witcofski, Ian, Jonah, and Piper Aguirre, and Jamie Brame; his nephew and family, Bob, and Diana Criger, Jim Criger, Stacy and Ian, Ada, and Grace; and many more nieces, nephews, and cousins.
Services will be held Saturday, April 11, 2015 at 1:00 p.m. in Greenlawn Funeral Home South, with burial to follow at White Chapel Memorial Gardens in Springfield, Mo. A visitation will be Friday, April 10, 2015 from 6:00 – 8:00 p.m. at the funeral home. In lieu of flowers donations can be made to Fair Haven Children’s Fund.