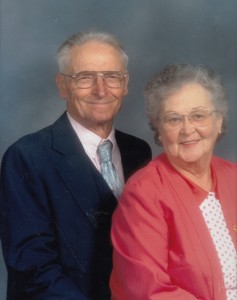 Francis Wayne McDaniel was born in Carthage, Jasper County, Missouri on January 23, 1923. Because of his mother’s health, the family moved to New Mexico when he was only six months old. They moved frequently because Wayne’s father was a traveling evangelist. After moving back to Lawrence County, Missouri in 1939, they attended Elm Branch Church where his father was an elder and Wayne was a deacon. It was there that he met Juanita Ragsdale. They were later married on September 3, 1942.
In 1944, they settled on 120 acres in Seligman, Missouri. They lived in that area where their two sons, Harold and Eddie were born, until 1955, when Harold died from complications of Rheumatic Fever. They then moved to Exeter, Missouri and lived on an eighty acre farm where their daughter Lola was born and lived there from 1955 until 1999. They were members of the First Christian Church of Cassville, Missouri, where Wayne was an elder. They then moved to Brighton, Missouri to be closer to family. They attended Parkview Christian Church in Springfield, Missouri where they made many new and special friends.
For many years, Wayne was an avid farmer and beekeeper. Many enjoyed the fruits of his labor. He had worked as a carpenter in the Exeter, Missouri area, overseeing many projects in that community. He was also faithful for many years making deliveries for Meals on Wheels. He made his last delivery the week before his death.
Preceding him in death were his father, George Parker McDaniel and mother Lola Augusta Wheat, and his son Harold Wayne. Also preceding him were all of his siblings, Charles (Sam), Everette, Catherine, Cletus and Wheat. His grandson Logan B. Clinkenbeard, also passed away in 2007.
Surviving Wayne are his two children, son, George (Eddie) Edgar McDaniel (Judy), and daughter, Lola F. Larsen-Shaw (John). He was blessed with four grandchildren: Michael Shannon McDaniel, and Jodie Lynn Clinkenbeard (Mark); James Edgar Foster (Veronica), and Perry Wayne Foster (Kristy). There are also great grandchildren: Jacob Ewan and Joshua Owen Foster, and Taylor and Hunter Nicol Foster and Shea McDaniel and Parker Matteo Clinkenbeard.
As we mourn his death, we will remember a life of service that was well-lived. Greenlawn North will be in charge of his services. Parkview Christian Church of Springfield, Missouri will be the site of a short visitation at 1:00 p.m., with a funeral service at 2:00 p.m., on Monday, April 20th, 2015. Wayne will be buried in Marionville, Missouri at the I.O.O.F. Cemetery following the services.