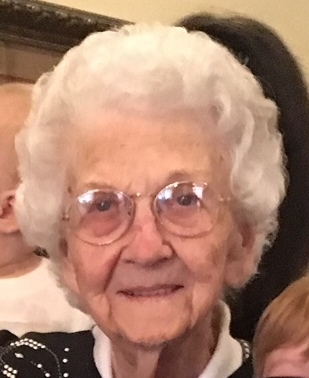 Fern Lavon Holt was born January 24, 1917, to “Doc” Walter and Estelle (Hutchison) Stewart, near Cliquot, MO, and passed away January 4, 2018, at Parkview Healthcare Facility Bolivar, MO.
She was united in marriage to Fola Ray Holt and settled in the Violet community east of Bolivar, Where she and Fola operated a farm for many years. She was a housewife and spent many of hours working on the farm. To this union three children were born Derral, Walter, and Karren. After raising her children she was employed as a pastry cook for SBU several years before retiring. She always took her children to church at Spring Valley Baptist Church while living on the farm. After she relocated to Bolivar she became a member of the Maranatha Baptist Church where she regularly attended until her health prevented her from attending.
In 1979 Fola and Fern relocated to Bolivar. She maintained her home until 2013, when she moved to Butterfield Park Residential Center and was a resident at the time of her passing.
She celebrated her 100th birthday in 2017. For Thanksgiving there was a gathering where she was surrounded by her family. She loved her family and her friends unconditionally and will be missed by everyone that knew her. She was blessed to have so many wonderful people that visited her and all of the caretakers that made her life enjoyable.
She was preceded in death by her parents; her husband Fola; four sisters: Maxine Brown, June Freeman, Dixie Lemmon, and an infant sister; and one brother Bill Stewart.
Fern is survived by her children: Derral Holt and wife Barbara of Springfield, MO, Walter Holt and Carol Holt of Bolivar, MO, and Karren Cogdill of Branson, MO; seven grandchildren: Connie Hopkins of Willard, MO, Steven Holt of Strafford, MO, Brian Holt of Springfield, MO, Christopher Cogdill of Ridgedale, MO, Craig Cogdill of Branson, MO, Cary Cogdill of Hollister, MO, and Kelly Holt of Bolivar, MO; 15 great grandchildren and 2 great great grandchildren; several nieces, nephews, other relatives and a host of friends.
The family would like to express their appreciation to all of the caretakers and people that became a part of her life in recent years.
Funeral services will be held Sunday, January 7, 2018, at 2:00 PM at Pitts Chapel with Pastor Jim Robbins officiating. Burial will follow at Greenwood Cemetery Bolivar, MO. Visitation will be held one hour before the service from 1:00 to 2:00 PM in the funeral home. Online condolences may be made at: www.greenlawnfuneralhome.com. Arrangements have been entrusted to Pitts Chapel Bolivar, MO.