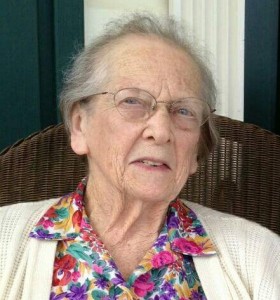 Flodell R. Alexander, 93 Springfield, MO
Flodell “Flo” Alexander passed on June 10th, 2016 at The Arbors at Lakewood Memory Care Unit. Flo worked beside her husband Joel E. Alexander at Springfield Baptist Hospital in the pharmacy and as the organist for the many Baptist churches where he preached. In later years Flo worked as a tax preparer for H& R Block. Flo is preceded in death by her parents Glen and Gladys Hendricks, husband Joel E. Alexander, sisters Glenna Jean (Ed) Dunaway and Marie (Gene) Hancock. She is survived by her son Joel Alexander (Lisa), daughter Sharon Terry, grandchildren Darren (Tennille) and Sean Terry, Karen (Terry) Warren, Jared (Kate), Jennifer and Lauren Alexander and great grandchildren, nieces, nephews and great nieces and nephews. The family wishes to thank the staff of Lakewood Assisted Living and The Arbors at Lakewood Memory Care Unit as well as Intrepid Hospice. The family requests donations be made to Missouri Baptist Children’s Home, 11300 St. Charles Rock Road, Bridgeton, MO 63044 or the Alzheimer’s Association, 1630 W. Elfindale, Springfield, MO 65807.
Visitation will be held at Greenlawn South at 9:00 a.m. on Monday June 13th with a memorial service at 10:30 a.m. Burial will be at Greenlawn Memorial Gardens.