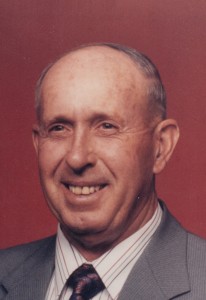 Floyd J. Jones, 84, passed away on February 21, 2015 at Mercy hospital in Springfield, MO. He was born on August 28, 1930 in Mammoth Springs, AR. to Uriah Jones and Ollie (Harrell) Jones. He married Earlene Ruth Foster on November 22, 1951 and she survives.
Floyd was baptized into Christ when he was 19 years old. Floyd and Earlene were one of the founding families of the East Grand Church of Christ in 1957 and the Fair Grove Church of Christ in 1965. He served in the Army Corp of Engineers and was stationed in Japan from 1951-1954. He loved to farm and was a dairy farmer for many years in Halfway, MO. Floyd was a Journeyman Electrician and was a 60 year member of the International Brotherhood of Electrical Workers Local 453 in Springfield, MO.
Floyd was preceded in death by his parents, brother; Lonnie Jones, sisters; Wilma Witherspoon, Mildred Carroll, and Bessie Stiles.
Survivors included daughters; Connie Sue Jenkins and husband Michael of Springfield, MO., Diane Marie Charlton, of Buffalo, MO., Amy Hammoudi, of Austin, TX. sons; Gaylen Lee Jones and wife Dedra of Springfield, MO., Keith Alan Jones and wife Jeanine, of Springfield, MO., sisters; Bonnie Sanders of Springfield, MO., and Edna Munger and husband Laddie, of Cary, N.C., brother; Jerry Jones and wife Ruth Ann, of Honey Grove, TX., fourteen grandchildren, nineteen great-grandchildren, several nephews, nieces and a host of friends.
Visitation will be Thursday, February 26, 2015 from 5pm-7pm at Greenlawn Funeral Home North Chapel.
Funeral Service will take place on Friday, February 27, 2015 at 11 am at the funeral home with burial to take place at 1 pm at the Missouri Veteran’s Cemetery.
In Lieu of flowers, contributions can be made to Fairhaven Children’s home in Floyd’s memory.