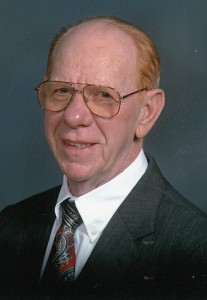 Rev. Francis (Chuck) Charles Jansen, Sr., age 81, of Springfield, MO, passed away Monday, January 18, 2016 at Mercy Hospital. He was born December 27, 1934, in Breese, IL, to Henry and Teresa (Koerkemeir) Jansen. Rev. Jansen was a graduate of Southern Baptist College in 1973 with a degree in Theology. He was a United States Army Veteran. Rev. Jansen was a retired Southern Baptist minister. He was united in marriage to Gloria Mincks on June 11, 2005.
He was preceded in death by parents, Henry and Teresa Jansen. He is survived by his wife,Gloria Jansen, Springfield, MO; six children, Dr. Francis Jansen, Jr. and wife Emily., Rogersville, Nancy Green and husband Gerry, Houston, TX, Cindi Griffith and husband Scott, Collinsville, IL, Michele Jansen, Overland, Peter Jansen and Kristine Overaker, Glen Carbon, IL, and Andrew Jansen and wife Amy, Branson; thirteen grandchildren, two step-grandchildren; two great-grandchildren; and a host of family and friends.
Funeral services will be held at 9:30 a.m., Friday, January 22, 2016, at Greenlawn Funeral Home North, Springfield, MO with Rev. Eddie Bumpers officiating. Burial will be held in Missouri Veterans Cemetery, Springfield, MO. Visitation will be held from 6-8 pm on Thursday, January 21, 2016 in the funeral home. Memorial contributions may be made to the Crossway Baptist Church 2900 North Barnes, Springfield, Missouri 65803.